While the world looks towards the Ukraine, the WHO has moved towards a global treaty which would tie member nations to a coordinated response to the next pandemic – and place the WHO ahead of the sovereignty and constitutions of all countries. 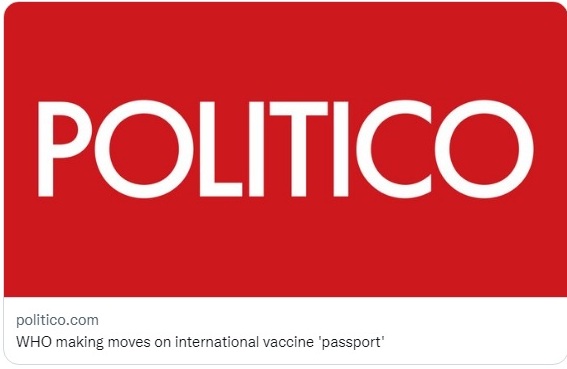 With help from Ben Leonard and Erin Banco 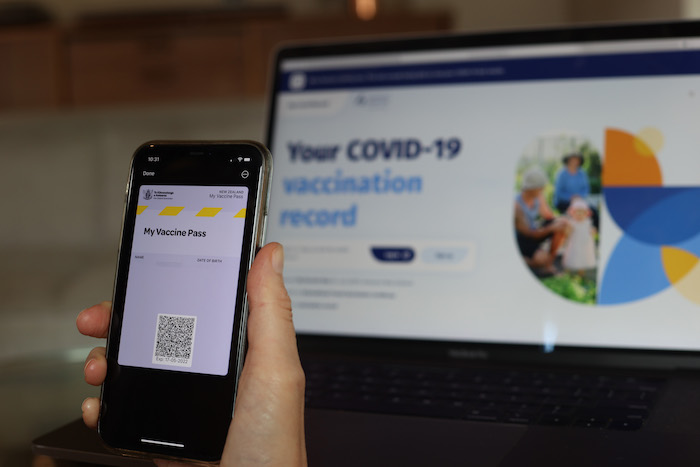 Countries and regions currently have a number of different digital vaccine credential standards, which can make international travel difficult.

The WHO is bringing together the groups to develop a “trust framework” that would allow countries to verify whether vaccine credentials are legitimate, said Brian Anderson, chief digital health physician at MITRE and a co-founder of the VCI.

Why it matters: The effort would aid international travel by allowing proof of vaccination to be more easily shared and verified, Anderson said. Many countries and regions have different standards for proof of inoculation, creating confusion for travelers and officials.

“It’s piecemeal, not coordinated and done nation to nation,” Anderson said. “It can be a real challenge.”

The WHO would say only that news on the topic should be coming “soon.”

The VCI is behind SMART Health Cards, which have become the de facto standard for digital vaccine credentials in the U.S., with dozens of states developing or adopting the technology. The group will participate in the initiative.

It’s unclear whether the U.S. would participate. The White House and the Departments of State and HHS didn’t respond to requests for comment.

Background: The move would be the most significant coordinated international push to enable interoperable credentials among nations and regions.

Existing standards include a digital Covid certificate for European Union member nations. The U.S. has no official standard despite SMART Health Cards’ dominance.

Advocates have touted the vaccine credentials, commonly known as passports, as a way to facilitate travel and reopening efforts. Many red-leaning states have opposed the technology, but that hesitancy appears to be softening as several of those states have adopted the technology.

No U.S. database: The Biden administration has said it wouldn’t issue digital credentials and hasn’t rolled out standards for vaccine credentials it said it would issue. Complicating the situation is that the U.S. doesn’t have a national inoculation database.

The CDC- and HHS-stamped Covid-19 paper vaccination cards are relatively easy to forge, which has raised concerns about fraud.

PANDEMIC TREATY TALKS UNDERWAY — GENEVA – Loyce Pace, the assistant secretary for global affairs at the Department of Health and Human Services, is in Geneva meeting with WHO and other global health leaders about a potential treaty to help lay the framework for an international response to the next pandemic, POLITICO’s Erin Banco writes. It’s Pace’s first trip to this city as assistant secretary.

Backdoor talks: The U.S. has been involved in backdoor discussions with the WHO on the treaty and how to strengthen the organization. A focus of the Biden administration’s combating Covid-19 and preparing for the next pandemic: Equity.

“It’s clear to us that an important question that needs to be addressed through any instrument is the question of equity. How that happens, the approach we take … is something that we need to discuss with member states starting tomorrow,” Pace said in a briefing with reporters Wednesday. She added that the equity conversation, while important, is unlikely to come up in any significant way until the procedural and process discussions around the formation of a body to oversee the drafting of the convention take place.

“We are just as anxious as anyone to really start to build that out,” she said.

Mind the details: Pace offered few details about U.S. treaty or amendment proposals to the International Health Regulations that govern WHO (another topic under discussion alongside the pandemic treaty talks).

But during Pace’s trip, POLITICO’s Ashleigh Furlong broke the news that, in January, the U.S. sent the WHO an outline of a series of amendments it’s proposing for the IHRs. Those amendments would require swift action by countries and the WHO during an emergency and give the WHO greater powers to act during a crisis, Furlong reports. The U.S. will hold negotiations with member states on the amendments with the intention of reaching a consensus by May.

‘There for a reason’: Of the IHR amendments, Pace said: “We know that we can make improvements to those systems and mechanisms. Otherwise, we wouldn’t have found ourselves in the position we have been with Covid-19. But the reality is the IHRs are there for a reason. And there are tweaks or other improvements we could make to those existing mechanisms, alongside looking towards something longer term like an international instrument, which will also still be critically important to closing gaps or solving some outstanding problems.”

PRIVATE SECTOR WANTS  MORE INPUT — The Global Business Coalition sent a letter to the WHO requesting more of a say in the agency’s decisions.

The business coalition — which includes the U.S. Chamber of Commerce, BusinessEurope, the Confederation of Indian Industry and others across six continents — argues that the private sector has been a key part of controlling Covid-19 and needs to be further engaged by the WHO.

“The current pandemic represents a paradigm shift in the way governments, business, and civil society forge deep bonds to respond to emergency situations and to develop sustainable health policies,” the coalition writes.

The WHO did not immediately respond to requests for comment by the time of publication.

AFRICA CDC ASKS FOR A TEMPORARY DELAY IN COVID-19 VACCINE DONATIONS — Until the second half of the year, the Africa CDC is asking for a pause on Covid-19 vaccine donations so it can use its current supplies and reduce waste, POLITICO first reported.

The request marks a shift in the main challenges the continent is facing, from a shortage of doses to the complicated logistics of distributing shots and overcoming reluctance to get vaccinated. The Africa CDC expects to resume receiving new shipments in the third or fourth quarter of the year.

SOUTH KOREA TO HOST DRUG MANUFACTURING TRAINING HUB — South Korea and the WHO announced the creation of a program to train developing countries to manufacture their own biologicals — including vaccines, monoclonal antibodies, insulin and cancer treatments.

The biomanufacturing training hub, a large facility outside of Seoul, is another effort — after the creation of the mRNA tech transfer hub — to boost the ability of low- and middle-income countries to produce their own drugs.

MORE RESTRICTIONS LIFTED IN EUROPE — Poland and the U.K. are lifting more Covid-19–related restrictions, POLITICO’s Wojciech Kość and Andrew McDonald report. Poland is scrapping all but basic restrictions, and the U.K. lifted all remaining regulations — even as it plans fourth shots for the elderly and vulnerable.

Bill Gates wrote in The Atlantic that “Paul is a hero, and I was fortunate to call him a friend,” adding: “I have never known anyone who was more passionate about reducing the world’s worst inequities in health — or who did more to live by his values.”

The New York Times reported that he “gained global acclaim for his work delivering high-quality health care to some of the world’s poorest people,” adding that Anthony Fauci broke down in tears in an interview, saying he and Farmer were “soul brothers.”

The Washington Post’s report characterized Farmer as “a doctor, a humanitarian and, by all accounts, an almost otherworldly force whose aspirations for global public health seemed unattainable until he showed they were within reach.”

Perhaps most important, he is remembered by those he helped treat throughout the world. In a 2000 New Yorker profile, Haitians he knew called him Doktè Paul, Polo, or Blan Paul. One said of Farmer: “God gives everyone a gift, and his gift is healing.”

26 May 22
viagra 100mg online price in india
by Nickavast

26 May 22
I like what you guys are usually up too. This type of clever work and exposure! Keep up the good works guys I've included you guys to blogroll. Feel free to visit my web blog: cheap mussoorie packages (Vera)
by Vera