Letter to the Editor

It is time to stop marching and begin action that will cut short the crimes being committed by the political party junta which has unlawfully taken over the Nation, and its minions in the bureaucracy, hospitals, media and even its private security forces posing as police and army. All these are acting outside of our Constitution and have been doing so since about 1966.

Also private employers and heads of companies that have enforced the unlawful, illegal and genocide of mass injections of the population with this non vaccine.

We need persons who have the skills and time to set up a open data base, to collect and compile information on all persons who have facilitated, promoted, enforced, coerced, aided and abetted or in any way participated or profited in this emerging genocide. This list would include alleged parliamentarians, judges, doctors, media owners and news room employees, TGA bribe takers, union officials who failed to stop their members being coerced into getting the lethal injection, heads of corporations, nurses who administered the kill shots etc.
Also all in the media who have aided and abetted the scamdemic destruction of our Nation.
Files detailing these crimes have to be created up to a court of law standard, detailing times places actions and public statements, evidence collected from the victims in preparedness for a new Nuremburg type trial. 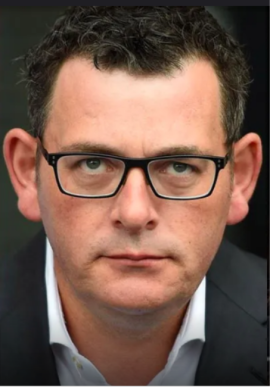 Could this madman from Victoria be first on the list?

Copies of evidence should be forwarded to all persons on this list. Also with the suggestion that they immediately seek legal representation.
This list of persons to be charged with Treason and Genocide or aiding and abetting the carrying out of such, must be open and public.

The conduct of setting up the data base needs to be anonymous and members of the public who contribute must be protected, but with the provision that at a future date they will have to come forward to verify evidence.

As time progresses, perhaps only six months, trials could begin in a peoples court, with the accused called to attend in their defence. Trials should proceed regardless of those charged attending or not.

The strict rules of Nuremburg, pertaining to the International crime of Genocide must be adhered to and if found guilty, sentences publically pronounced.
Sentence to be carried out when the people of Australia regain Lawful Government.

Let the victims of this criminal agenda begin to set this in motion, their lives are now most likely going to be very short as a result of the injection. Justice rather than revenge should be the guiding motive. We are at war against the criminals who control the fake parliaments.
Keating signed the Rio “Bio Diversity ” treaty in 1986. Howard ratified it. They committed their fake Parliaments to cull 11 out of 12 of us out in 1992- Agenda 21. They set out destroying our ability to survive as a Nation. They signed up to the Popes Paris Accords which under the bogus “climate change ” mantra junked all our industry’s.

Earlier “free” trade actions sent all our manufacturing to our enemy and the Vatican’s friend China. This was treasonous at best. Now they are faithfully carrying out their final solution with the poisonous injection.
Get busy start a genocide data base.

01 Feb 23
If a Clifornia ticket matches all six numbers during the subsequent Mega Millions drawing on Friday, that quantity could grow to four. Here is my web page ... 베픽 파워볼
by 베픽 파워볼

01 Feb 23
Hi there just wanted to give you a quick heads up. The text in your article seem to be running off the screen in Safari. I'm not sure if this is a format issue or something to do with internet browser compatibility but I thought I'd post to let you know. The layout look great though! Hope you get the issue fixed soon. Thanks
by sv388