WASHINGTON DC — Since the Russian offensive inside Ukraine commenced on February 24, the Ukrainian military has cultivated the image of a plucky little army standing up to the Russian Goliath. To bolster the perception of Ukrainian military mettle, Kiev has churned out a steady stream of sophisticated propaganda aimed at stirring public and official support from Western countries.

The campaign includes language guides, key messages, and hundreds of propaganda posters, some of which contain fascist imagery and even praise Neo-Nazi leaders.

Behind Ukraine’s public relations effort is an army of foreign political strategists, Washington DC lobbyists, and a network of intelligence-linked media outlets.

Ukraine’s propaganda strategy earned it praise from a NATO commander who told the Washington Post, “They are really excellent in stratcom — media, info ops, and also psy-ops.” The Post ultimately conceded that “Western officials say that while they cannot independently verify much of the information that Kyiv puts out about the evolving battlefield situation, including casualty figures for both sides, it nonetheless represents highly effective stratcom.”

Key to the propaganda effort is an international legion of public relations firms working directly with Ukraine’s Ministry of Foreign Affairs to wage information warfare.

According to the industry news site PRWeek, the initiative was launched by an anonymous figure who allegedly founded a Ukraine-based public relations firm.

“From the first hour of war, we decided to join the Ministry of Foreign Affairs to help them distribute the official sources to show the truth,” the nameless figure told PR Week. “This is a hybrid war: the mix of bloodily struggling fight with a huge disinformation and fake campaign lead by Russia [sic].”

According to the anonymous figure, more than 150 public relations firms have joined the propaganda blitz.

“We’ve been privileged to help coordinate efforts to support the Ukrainian Government in the last few days, “ Ingham told PRovoke Media. “Agencies have offered up entire teams to support Kyiv in the communications war. Our support for the Ministry of Foreign Affairs of Ukraine is unwavering and will continue for as long as needed.”

The folder is run by Yaroslav Turbil, described on his LinkedIn page as “Head of Ukraine.ua — Ukraine’s digital ecosystem for global communications. Strategic Communications & Country Brand Promotion.” Turbil has worked at multiple “civil society” organizations closely linked to the U.S. government and interned at Internews, a U.S. intelligence-linked organization that operates under the guise of promoting press freedom. Among the propaganda constructs distributed in the dossier, is a video of the Snake Island incident, which was quickly proven false, in which Ukrainian border guards stationed on a small island were reported to have been killed after they told an approaching Russian warship that had urged them to surrender to “Go f*** yourself.” President Zelensky held a press conference announcing he would award the men the Hero of Ukraine medal as mainstream media spread the story widely. However, the supposedly-dead soldiers quickly turned up alive and well, proving their heroic stand to be a farce.

Despite the story being proven as fake, the dossier contains a propaganda video promoting it.

Another folder in the dossier is run by Ukrainian MFA graphic artist Dasha Podoltseva and contains hundreds of propaganda graphics submitted by artists in Europe and the United States.

Some feature generic “no war” messages, while dozens of other images celebrate “The Ghost of Kiev” – a heroic Ukrainian pilot who turns out to be non-existent – and the phony “Snake Island 13” incident.

Many use xenophobic and racist language, and some are explicit in their praise of prominent Ukrainian Neo-Nazis, including C14 leader Yevhen Karas, the Right Sector fascist paramilitary, and the Neo-Nazi Azov Battalion. Multiple images call for “Banderite smoothies” – a reference to Molotov cocktails named for the late OUN-B commander Stephan Bandera, who collaborated with Nazi Germany in the mass murder of Jews and ethnic Poles during World War II. Another image depicts a book titled the: ”Encyclopedia of Incurable Diseases,” listing Russia, Belorussia, North Korea, Syria, and Eritrea. 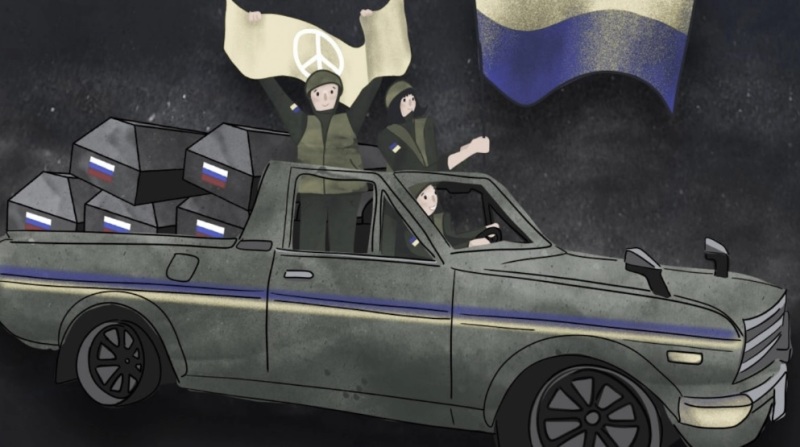 03 Oct 22
I pay a quick visit daily some web sites and websites to read articles or reviews, however this weblog gives quality based content.
by tiwa savage ft zinoleesky jaiye foreign lyrics

03 Oct 22
Thank you for every other informative web site. The place else may just I am getting that type of info written in such an ideal method? I have a project that I'm just now running on, and I have been on the glance out for such information.
by https://ebusinesspages.com/keonhacai168.user