In 2001, the US was expelled from the UN Human Rights Commission.

May 4, 2001 marks the day when the US was voted off the United Nations Commission on Human Rights. The decision should have provided the superpower with a much-needed wakeup call. Instead, it just became more reckless on the global stage.

With the benefit of hindsight, there was no loss of irony about Washington losing its seat on the body for the first time since the panel’s founding in 1947. That’s because, as far as America’s track record on human rights was concerned, the ‘best’ was yet to come. In a few short years, the United States would rewrite the book for inhumane behavior in its decades-long War on Terror. And while that is something nobody could have predicted in May 2001, perhaps the feeling that America had lost its moral compass was already in the air.

One of the stated reasons for the Geneva-based organization voting out the global power was its increasing frustration with Washington balking on its commitment to international treaties, such as the Kyoto Protocol on climate change. In direct opposition to the opinions of its European allies, George W. Bush withdrew Washington’s tentative support for the measure, arguing it would cause “serious harm to the US economy.”

Another cited reason for the Americans being ousted from their chair was due to the relentless support of Israel over the latter’s perennial conflict with the Palestinians. In March 2001, following non-stop episodes of violence and killing, with the Palestinian side suffering the brunt of the casualties, the UN Security Council attempted to pass a resolution that would have created “an appropriate mechanism to protect Palestinian civilians, including through the establishment of a United Nations observer force.” Predictably, the United States was the only member to deliver a thumbs down on the motion, with four abstaining. In fact, nearly all US vetoes cast since 1988 blocked resolutions aimed at Israel, because, as the US claims, Palestinian terrorist groups were not adequately condemned.

Not everyone, of course, agreed with the decision to drop the US from its membership of the human rights club. Amnesty International, for example, jumped to America’s defense, calling its removal “part of an effort by nations that routinely violate human rights to escape scrutiny.”

Whatever the case may be, this brings us to the real irony of America being stripped of its seat in the first place. As stated earlier, not only did the Washington fail to heed the warning over its increasingly arrogant actions, its behavior actually worsened over time.

In his State of the Union address on January 29, 2002, George W. Bush branded three countries — North Korea, Iran and Iraq — as an “axis of evil.” Just prior to the US leader casting judgment on those nations, Washington opened the doors to the Guantanamo Bay Detention Camp (Gitmo), or, as Amnesty International famously dubbed it, “the Gulag of our time.”

Situated on the southernmost tip of Cuba at the Guantanamo Naval Base, Gitmo has become synonymous with the very things that the UN Human Rights Commission fought to prevent, namely brutality, torture, and the perversion of justice.

Moazzam Begg, a prisoner-turned-activist who spent three years at Gitmo, described the horrors he witnessed. “I saw two people beaten to death,” Begg told RT. “I saw one prisoner with his hands tied above his head to the top of the cage being repeatedly punched and kicked until he was killed. The Americans have accepted that this was a homicide.” 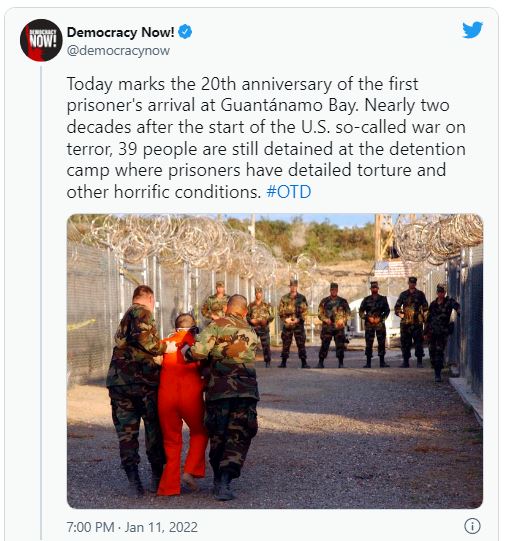 In April 2004, it was also discovered that the United States was responsible for severe human rights violations at the Abu Ghraib prison in Iraq. Euphemistically described as ‘enhanced interrogation techniques,’ prisoners were systematically tortured, raped and sodomized. The Guardian published some of the shocking images, and viewer discretion is strongly advised.

Against all expectations, America’s human rights record did not get better with the arrival of Barack Obama, America’s first black president who rose to power on the promise of “hope and change.” In 2016 alone, on Obama’s watch, US forces dropped some 26,171 bombs on foreign countries. Syria and Iraq were both targeted some 12,000 times each, while Afghanistan (1,337), Libya (496), Yemen (35), Somalia (14), and Pakistan (three) also experienced attacks on their territory. In his last year in office, Barack Obama had the ignoble distinction of being at war longer than any other president in US history.

Has the United States learned anything over the past several decades since being voted off the UN commission? Judging by the fate of some of its biggest detractors, it would appear not. In 2010, the Australian activist Julian Assange published a series of leaked documents – with Hollywood-sounding names like ‘Collateral Murder’ and ‘Iraq War Logs’ detailing possible war crimes by the US military – provided by Army analyst Chelsea Manning.

After being granted asylum for seven years at the Ecuadorian Embassy in London on the grounds of political persecution (Assange was also wanted in Sweden on sex assault allegations, but feared that if he were there he would be delivered into the hands of American prosecutors), he was arrested by the UK police. In May 2019, President Donald Trump’s government charged him with violating the Espionage Act of 1917. The move was harshly condemned by media outlets as an infringement on the First Amendment. Since April 2019, Assange has been incarcerated at the Belmarsh maximum-security prison in London as his health reportedly deteriorates.

Meanwhile, Edward Snowden, the former CIA analyst turned whistleblower, has also paid a hefty price for shining a light on some of the US government’s less admirable activities, like spying on citizens both at home and abroad. Now living in Russia, Snowden reportedly awaits the day when he will be allowed to return to his homeland.

For those believing inhumane treatment was reserved for “terrorists” and “traitors,” just this week, Russian pilot Konstantin Yaroshenko returned home after enduring more than a decade in a US prison over his alleged involvement in a drug-smuggling scheme. Yaroshenko revealed the horrors he was exposed to during that time.

“There was a torture room where I was tortured for two-and-a-half days. It was inhuman torture, physical and psychological, with enormous pressure. At some point, I didn’t even want to live… I didn’t want to return back into this world.”

Clearly, this is not the sort of behavior one would expect from a country that regularly passes judgment on other governments. The saying about ‘people who live in glass houses’ comes to mind. Unsolicited sermons on human rights make more sense coming from those who practice what they preach.

PrevPreviousBetween a Rock and a Hard Place?
NextBeing Cold for the Great Reset of the GlobalistsNext