Russian President Vladimir Putin is still “very firmly” in control in the Kremlin, according to The New York Times’ Steven Lee Myers.

“The way he has created the political system in Russia, the way he is able to exert control over all of the various branches of the armed services, the police, as well as the military and the secret services – I think that makes it very unlikely that somebody would be able to step in and seize control from him,” Mr Myers said.

“The caveat of course is, with authoritarian rulers, it’s always impossible to know when the last moment has come.

“There have been a lot of rumours in the last few days, but I think we should … still treat those as rumours.”

Flankymanga
Finally somebody that knows the man good enough that be wrote a book about him. Journalists have to listen to this guy and stop blabbering wishful thinking.

donna macleod
FINALLY, a sane viewpoint on this …

Leith Mark
I still don’t know why they keep talking about the time being taken… Russia has been showing restraint in light of their actual force projection capabilities. Stop pretending that this isn’t carefully scripted and stage managed.

Vlad Khvan
Finally, a balanced view on the strategic situation.

Brett Mitchell
Russia is never as strong as she seems. Or as weak. 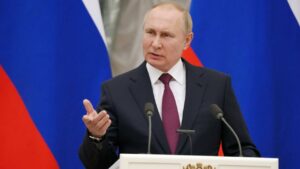 PrevPreviousA Large Scale False Flag Cyber-Attack Now Imminent?
NextFace Masks DO NOT Save Lives NOR Do They Stop the “Pandemic”. Hear It From This Doctor YourselfNext