As a patriotic American, this is the kind of article that pains me to write. But unlike the Democrats and their make believe gender identity fairy tales that pretend biology isn’t real, I can’t simply choose to alter the laws of economics and tell you something that isn’t so. The truth is that based on things that have been set into motion right now, the US dollar goes to zero. And the Russian Ruble emerges as a dominant, commodity-backed world currency that gives Russia long-term economic strength and competitiveness.

Tom in MO
I find it very hard to believe the narrative that Russian troops are freezing in foxholes, out of food or bullets, etc. Love ’em or hate ’em, Russians know what they are doing with warfare. They knew in advance they would have to go in, and planned accordingly. Much more likely is that Putin is performing the classic Sun Tzu strategy of appearing weak when you are strong; and that the west is believing what they want to hear. I suspect that any NATO etc troops entering Ukraine will cease to exist within minutes. And Putin has already warned the west to that effect. NATO would be getting its people killed on purpose, as an excuse to escalate.

Steve Stojanovich
What world do you live in? Have you looked at a map of Europe? Russia is on the BORDER of Ukraine. Russian troops are a 10 min drive to a gas station!! Russia is delivering food to Ukrainian citizens in cities that Russia has conquered. You, Mike, are in some fukked up fantasy world.
Putin already said he would use nukes, he said the “decision has been made”. Maybe you should try to watch news from RUSSIA.
As for the pentagon wars, we know this already from 10 years ago when Jeremy Corsi told the world the pentagon is half Satanist. Remember Corsi? He recruited Trump to get rid of the satanists.

Dawnie Rotten
You’re getting BOGUS info, Mike!! Russian Troop are NOT ‘in a bad way’!!! They have PLENTY of FOOD/FUEL. RUSSIA……has PLENTY OF FOOD/FUEL!!! This is why so-called ‘sanctions’ do NOTHING, against Russia! When it come to FOOD/FUEL….Russia is SELF-SUSTAINABLE!!

And as I KEEP SAYING…..Russia/Putin are FIGHTING THE NWO/GLOBALISTS/KHAZARIAN’S-NAZIS!!!!
The KHAZARIAN’S are Soros/Rothschilds/MSM/HELLYwood/ect…….they are the BANE OF HUMAN EXISTENCE, and HAVE BEEN, for THOUSANDS of YEARS! LEARN……REAL……HISTORY! The ENEMY IS…….the KHAZARIAN’S (aka the NAME STEALERS)! They ARE ‘The Globalists’!

Dawnie Rotten
WHERE are you getting your Intel, Mike. NO ONE, inside the Russian Military, is going to ‘take out’ Putin!! SOMEONE is blowing SMOKE UP YOUR ASS, Mike! Russia IS……WINNING!

Klondikeone
I don’t believe that the Russians are in any way deficient. PUTIN knows what he’s doing. He is Russia’s Trump. Don’t believe what they are saying. Love the. What AMAZES me is that we, Americans are allowing a few sh*t heads to DESTROY us. THAT is amazing.

Reality check
Mike, I think you are getting a bunch of disinfo about Russia. The temps in Ukraine are hovering around 0 Celsius, so no one is freezing, especially no one from Russia. In Canada we walk around in tshirts in that weather and Russia is colder that we are. The sanctions have made Putin very popular in Russia and he has an approval rating north of 75% in the latest polls so a coup is a pipe dream of western leaders. Lastly, these reports about the Russians being poorly supplied are non-sense. They have air supremacy and control all the areas they are resupplying and the supply route is short as Ukraine is next door. Someone gave you a wish list of things they hope happen to Russia but none of those things are happening or will happen. The Russians are many things but stupid and incompetent are not among them. They are smart, they are deep planners, and they are organized.

Suzanne Critchfield
I am confused. We have white hats?? If we have white hats, where the hell are they? Why have they not stepped up to remove this fake installed clown in the White House?

Armen Makart
I am not sure if that info is accurate. Russian sources I have as well as live reporting from Ukraine do not support the notion that Russia is running out of supplies. If so how are they sending 100 tons of aid. Armenia is now sending 80 ton of food and supplies for Ukrainian people.

TheAmericanPeople
On the vid you posted yesterday, one of the goats did not seem as interested in devouring purple oak leaf lettuce like the other goats, i suspect she might be a Russian spy and had already eaten some of your produce before you arrived. 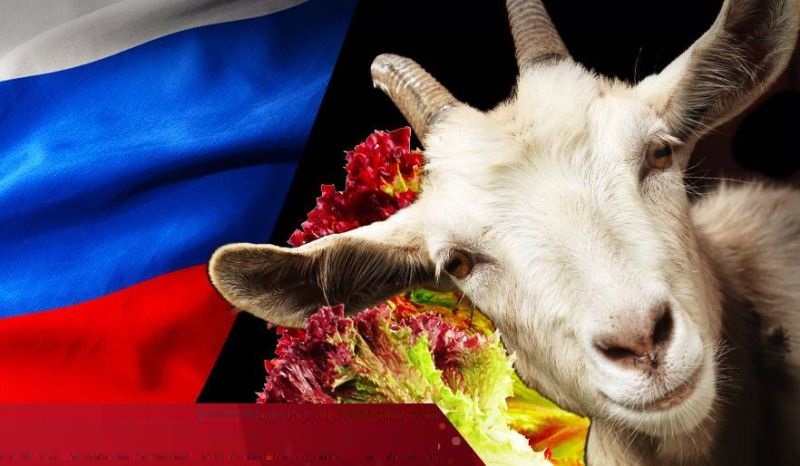 03 Feb 23
What's up, yup this paragraph is in fact pleasant and I have learned lot of things from it regarding blogging. thanks.
by Brain Food