“… a WikiLeaks file regarding the Canadian counter-insurgency operations manual. “It is a fifth-generation warfare manual that spells out the Canadian government’s plan to conduct extrajudicial killings of political dissidents for minor and arbitrary reasons…” 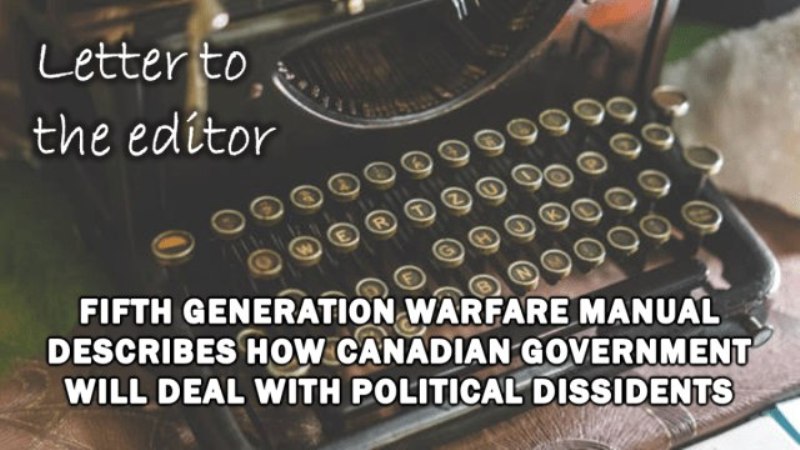 A reader, Dave, writes to highlight a WikiLeaks file regarding the Canadian counter-insurgency operations manual. “It is a fifth-generation warfare manual that spells out the Canadian government’s plan to conduct extrajudicial killings of political dissidents for minor and arbitrary reasons,” he writes.

WikiLeaks released the file on 3 August 2009. “I have been sharing this file for years,” writes Dave.

In July 2009, Anthony Fenton wrote an analysis of the Canadian Forces’ counter-insurgency (“COIN”) operations doctrine. It had been in development since 2005 and was authorised by Chief of Land Staff Lt. Gen. Andrew Leslie in the waning days of the Bush administration, wrote Fenton. It was not formalised for another two months – six weeks after the inauguration of President Barack Obama.  Fenton’s analysis argued that the Canadian counter-insurgency manual reflects US-Canada “synergy.”  We mention Fenton’s article as readers may be interested in reading this analysis in addition to the letter below.

Absolutely shocking proof that covid was a planned genocide!

It is a fifth-generation warfare manual that spells out the Canadian government’s plan to conduct extrajudicial killings of political dissidents for minor and arbitrary reasons.

You will be considered a terrorist and killed with no process, rights or appeals if you are one of the following:

So, it’s nothing but unsubstantiated slander that gets you targeted and destroyed. You don’t ever need to commit any acts of violence at all.

But the real shock comes in section four* which describes how a fake viral pandemic could be used to fulfil all their objectives of isolating, immobilising, impoverishing, torturing and killing people on a massive scale.

I have been sharing this file for years.

Wikileaks has a whole collection of counter-insurgency manuals for all NATO countries.

These tactics are based on narcissistic abuse methods. The same methodology as satanism. The known tactics of psychopaths, narcissists and paedophiles.

Tell me you don’t recognise that this was the basis of the pandemic rather than scientific and medical best practices!!

The public needs to see this and I am being stonewalled at every turn.

Project Veritas are just the latest gatekeepers that have ignored this story for far less important news.

Please get this out.

The people deserve to know that NATO attacked us and now is trying to provoke a war with Russia to the same ends.

*Note from The Exposé: For ease of reference, we have copied and pasted below Chapter 2, Section 4, page reference 2-21 (or pg. 65) of the pdf file: Canada National Defence Land Force: Counter Insurgency Operations, 13 December 2008 (pdf), in which “COIN” is the acronym for “counter-insurgency”:

CONCLUSION – A MEDICAL METAPHOR FOR AN INSURGENCY AND COIN

1. An insurgency may be compared to a communicable disease. The insurgent ideology and its popular support are spread through a population by exposure to the equivalent of risk factors: the exploitation of legitimate grievances, propaganda and the insurgent narrative. Agents for the spread of the “disease” are memes – behavioural practices passed on by imitation. Many individuals, especially young people, are not necessarily drawn to an insurgency out of ideological commitment but rather through social and cultural associations between family members and friends.

2. A communicable disease is countered through a holistic and systematic approach involving a wide range of means: changes to behaviour and the environment, such as the reduction of risk factors; isolation and quarantine; inoculation; and, treatment of the clinically infected.

5. The solution to an insurgency is a political one, which will require a comprehensive approach incorporating a wide variety of agencies with the military in a supporting role. This is reflected in the philosophy and principles that frame the conduct of a COIN campaign.

08 Dec 22
It's an awesome paragraph designed for all the internet people; they will obtain benefit from it I am sure.
by kwiaciarnia Opoczno

08 Dec 22
The Korean Nurses Association was founded inn 1923 and has seventeen regional chapters andd ten affiliated organizations, which includes the KABONE . my blog - 유흥알바
by 유흥알바

08 Dec 22
Genuinely no matter if someone doesn't understand after that its up to other viewers that they will help, so here it happens.
by overview

08 Dec 22
Stunning quest there. What happened after? Good luck!
by hack bank

08 Dec 22
Way cool! Some extremely valid points! I appreciate you penning this write-up and the rest of the site is extremely good. https://www.youth4work.com/y/GreenhouseCbdGummiesUK/Greenhouse-Cbd-Gummies-Uk-blog/20546 https://artmight.com/user/profile/849355 https://www.stageit.com/greenhousecbdgummies
by GreenHouse CBD Gummies