Former US Secretary of State Henry Kissinger turned 99 on Friday and Ukrainian government-linked activists marked the occasion by adding his name to their Mirotvorets (‘Peacemaker’) website. Labeled “an accomplice in the crimes of the Russian authorities,” Kissinger was blacklisted after he called for a negotiated peace between Kiev and Moscow and a return to the pre-February status quo.

Created in 2014, the Mirotvorets website – whose homepage features a grizzly mosaic of dead Russian soldiers – is a publicly searchable database of what it calls “pro-Russian terrorists, separatists, mercenaries, war criminals, and murderers.” These range from members of the Russian military to Western politicians like Hungary’s Viktor Orban, who has opposed sanctioning Russian oil and gas. It is commonly believed that Mirotvorets is controlled by the Security Service of Ukraine (SBU).

Kissinger is accused by Mirotvorets of “spreading narratives of Russian-fascist propaganda and blackmail… in exchange for the truncation of Ukrainian territory.” These charges make him “an accomplice in the crimes of the Russian authorities against Ukraine and its citizens,” his entry continues.

Earlier this week, Kissinger told attendees of the World Economic Forum in Davos, Switzerland, that a peace deal must be reached between Kiev and Moscow in the coming months, lest the conflict in Ukraine spiral into a global war between NATO and Russia. To do this, Kissinger said that Ukraine must at least accept a return to the “status quo ante,” or relinquish its territorial claims to Crimea and grant autonomy to the Donetsk and Lugansk People’s Republics.

Kissinger is a prominent advocate of the realpolitik school of international relations, which puts the practical interests of nations before their ideological stances. As President Nixon’s secretary of state, he spearheaded the US’ diplomatic outreach to China during the 1970s, which was aimed at preventing Beijing from allying itself with Soviet Russia.

In his Davos speech, Kissinger recalled that eight years ago, when the Ukrainian crisis was launched with an armed coup in Kiev, he advocated for Ukraine to become a neutral state and a “bridge between Russia and Europe rather than… a frontline of groupings within Europe.”

While US and NATO leaders have since discarded this advice and poured an unprecedented numbers of troops and weapons into Eastern Europe since the start of Russia’s military operation in February, Kissinger urged Western leaders to remember that “Russia has for 400 years been an essential part of Europe,” and should not be “driven into a permanent alliance with China” – a position that somewhat mirrors his 1970s stance on China.

Kissinger’s call for negotiations and concessions was rejected by Ukrainian President Volodymyr Zelensky, who declared in his own Davos speech on Wednesday that “Ukraine will fight until it regains all its territories.” However, Zelensky also told world leaders this week that “we may try and go the diplomatic way” with Russia, “unless it is too late.”

“The Ukrainian leadership constantly makes statements that contradict each other, which makes it impossible to fully understand its intentions and whether it is ready to take a sober approach and acknowledge the real state of affairs,” Kremlin spokesman Dmitry Peskov responded on Friday. 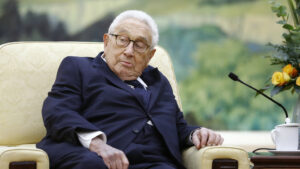 PrevPreviousKlaus Schwab, Pfizer CEO Trash ‘Conspiracy People’ at World Health Assembly: ‘There Is a Very Fanatic Group of Anti-Vaxxers That Will Go After Us No Matter What’
NextThomas Flanigan: Ohio Doctor Writes His Own Obituary After Moderna Shots, Died 11 Weeks LaterNext