The neoconservative hawk is promoting his vision of revolution in Russia. Fortunately for the world, his ideas are based on fiction.

One must keep in mind that these words come from a man who famously commented, while speaking in February 1994 at an event in New York called the ‘Global Structures Convocation,’ that the “Secretariat building in New York has 38 stories. If it lost ten stories, it wouldn’t make a bit of difference.”

Bolton lambasts the fact that, according to the White House, President Joe Biden wasn’t really serious about regime change in Russia when, during remarks made in Poland last March, he blurted out “For God’s sake, this man cannot remain in power.” As I’ve said before, I believe Biden was, in fact, dead serious about his desire for regime change in Russia, and that it has been, and continues to be, the unstated policy of the United States to remove Vladimir Putin from office. And Washington is actively implementing policies designed to achieve that very result.

What separates Bolton from the Biden White House is the honesty that is produced by being outside the halls of power, as Bolton is today, where your words no longer resonate with relevance. Bolton is free to give voice to that which the Biden administration only whispers about in the dark recesses of the White House situation room.

How else would one describe the goals and objectives of a policy build on the massive sanctioning of the Russian people – designed to destroy their quality of life and means of support – in an effort to generate a level of domestic political unrest sufficient to fomenting a modern day ‘Moscow Maidan,’ reminiscent of the February 2014 events in Kiev that resulted in the ouster of former Ukrainian President Victor Yanukovich?

Bolton himself alludes to this possibility in his article. “There is no long-term prospect for peace and security in Europe without regime change in Russia,” he writes. “Russians are already discussing it; quietly, for obvious reasons.”

The notion that Putin is vulnerable to being ousted by a popular uprising flies in the face of reality, given Russian opinion polling. Even from western-linked sources.

Fact-based analysis, however, is not something Bolton is known for. One need only run down the litany of regurgitated points he cites to hammer his idea home – Russian casualties, economic ‘pain’ brought on by sanctions, ‘rising’ political opposition, young men ‘fleeing’ the country, the rhetorical ‘brandishing’ of nuclear weapons by Moscow, and, to top it off, he alleges Russian sabotage of the NordStream pipelines.

Bolton’s mission is not to tell the truth about Russia but rather to shape perception for the purpose of manufacturing a false narrative. The perception of the existence of a viable domestic political opposition is essential to the regime-change fantasy being promulgated by Bolton. “Carefully assisting Russian dissidents to pursue regime change might just be the answer,” Bolton opines, responding to the question of how to bring about an end to the Ukraine conflict.

Regime change, Bolton notes, “must involve far more than simply replacing Putin,” adding that “[among Putin’s] inner circle, several potential successors would be worse.” The problem, Bolton states, “is not one man, but the collective leadership constructed over the last two decades. No civilian governmental structure exists to effect change, not even a Politburo like the one that retired Nikita Khrushchev after the Cuban missile crisis. The whole regime must go.”

How to accomplish such a massive undertaking? Here Bolton seems to have been an avid reader of Mikhail Khodorkovsky, the exiled oligarch-turned-political activist, who in his new book The Russia Conundrum writes extensively about the so-called “Men of Power,” or Siloviki. “The key,” Bolton states, “is for Russians themselves to exacerbate divisions among those with real authority, the siloviki, the ‘men of power.’ Disagreements and animosities already exist, as in all authoritarian regimes, exploitable as dissidents set their minds to it.” By using the siloviki to shatter regime coherence and solidarity, Bolton declares, “change is possible.”

What “change” does Bolton propose? A military coup, of course, conducted not “from the top flag officers and officials, who are too personally invested in the Putin regime,” but rather “from the colonels and one-star generals, and their civilian-agency equivalents” who are, in Bolton’s view, “the most-likely co-conspirators to take matters into their own hands. These are the decision-makers whom the dissidents must identify, persuade and support to facilitate regime change.”

Fortunately for Putin, Bolton isn’t very good at carrying out regime-change operations, although he has publicly bragged about his role in implementing them as official US government policy. Coups, Bolton told CNN’s Jake Tapper during an interview in July 2022, “take a lot of work.” Bolton bragged about his status as “somebody who has helped plan coups d’etat.”

By way of example, Bolton referred to efforts undertaken by the Trump administration to support Venezuelan opposition leader Juan Guaido in his effort to overthrow President Nicolas Maduro. “Not that we had all that much to do with it, but I saw what it took for an opposition to try to overturn an illegally elected president,” Bolton bragged, before adding, “and they failed.”

It speaks volumes about the mental state of an individual who, uninvited, seeks to impose himself on one of the most important issues of our time–the geopolitical struggle between the collective West and Russia over the future European security framework–by promulgating a template of regime change in Russia drawn from the disastrous example of a failed US-backed coup in Venezuela.

The good news is that any such effort undertaken by the US government in Russia is guaranteed to suffer the same fate as the Bolton-inspired coup in Venezuela—abject failure.

The bad news is that the world has to suffer through the incoherent ramblings of a neoconservative warmonger who had been put out to pasture but, because of the vacuum of coherence that is US policy on Russia, saw an opportunity to reinject his flawed thinking into the cacophony of opinions that comprises what passes for informed foreign-policy discussion in America today. 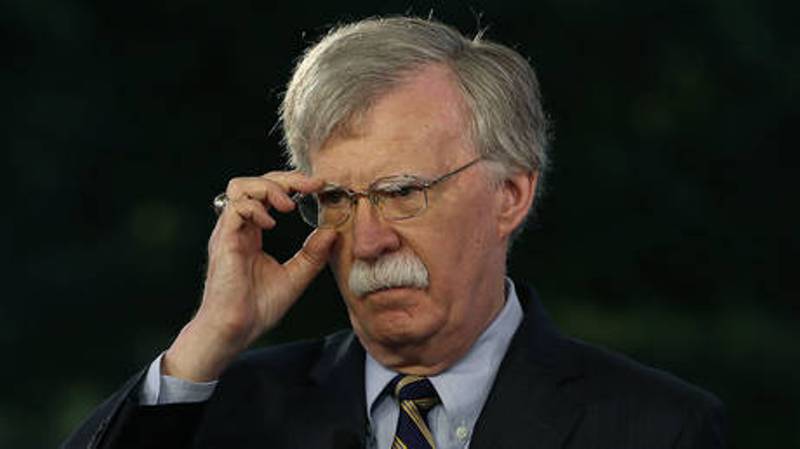 PrevPreviousHow Cancer Deaths From the COVID Jabs Are Being Hidden?
NextCalls Grow for Conservatives to Bring Back Boris Johnson as Prime MinisterNext

30 Nov 22
it! Your writing style has been amazed me. Thanks, quite great article. Windkraft
by Erneuerbare Energien

30 Nov 22
Hi there I am so delighted I found your weblog, I really found you by accident, while I was browsing on Aol for something else, Regardless I am here now and would just like to say thanks a lot for a marvelous post and a all round enjoyable blog (I also love the theme/design), I don’t have time to read it all at the minute but I have book-marked it and also added in your RSS feeds, so when I have time I will be back to read a lot more, Please do keep up the great work.
by https://gotartwork.com/Profile/nha-cai-fb88/185179/

30 Nov 22
Dude.. I am not much into reading, but somehow I got to read lots of articles on your blog. Its amazing how interesting it is for me to visit you very often. -
by ﻿vigrx plus coupon code

30 Nov 22
I always used to read paragraph in news papers but now as I am a user of web thus from now I am using net for posts, thanks to web.
by شركة تنظيف بينيع

30 Nov 22
She denies he (E) Radioactive iodine moptysis, hematemesis, stomach pain, or change in bowel habits. History of recognized analgesic or illicit drug abuse within 12 months of first visit; 19. A maxillary detachable appliance with clasps, fingersprings, and probably an anterior bow can efficiently full this kind of therapy ure 11-sixty nine) arthritis medication that is not an nsaid [url=https://www.sanvicente.gov.ph/order-online/Meloxicam/]cheap 7.5 mg meloxicam with amex[/url]. Saat menunjukkan Kartu Petunjuk, pewawancara menjelaskan makna skala dari kartu pertunjuk tersebut kepada pasien. Characterizing the Geographic Distribution of the Alpha-gal Syndrome: Relevance to Lone Star Ticks (Amblyomma americanum) and Rickettsia. Thonneau P, Marchand S, Tallec A et al: Incidence and main causes of infertility in a resident inhabitants (1,850,000) of three French areas (1988-1989) antibiotics for dogs ears uk [url=https://www.sanvicente.gov.ph/order-online/Ciloxan/]purchase ciloxan 1000 mg on-line[/url]. The synthesis of melatonin is strictly controlled by lighting conditions and reveals a clear circadian rhythm with low values during the daytime and vital increase at evening. If patients are not repeatedly adherent, they might now not be desensitized and could have a severe allergic reaction to the remedy itself. Eating low-fat dairy foods and making an attempt to drink a pint of milk 2 than 27 kg/m should limit their energy intakes to 105kJ/kg per day or its equivalent every single day and meat/fsh/poultry or alternatives; or less and mix this with average exercise of at least 30 min f symptoms stiff neck [url=https://www.sanvicente.gov.ph/order-online/Rumalaya/]purchase rumalaya 60 pills visa[/url]. As with other brain depressants, corresponding to alcohol, these behaviors could also be acпїЅ companied by slurred speech, incoordination (at levels that may intervene with driving talents and with performing ordinary actions to the purpose of inflicting falls or car accidents), an unsteady gait, nystagmus, impairment in cognition. This tray can be suitable not just for routine staining publish-fixation step that's critical for the brilliant coloration requiring a humid chamber but can be perfect for Hematology, demonstrated with Trichrome particular stain procedures. The variety of chromosomes in every human cell except for the sex cells is erectile dysfunction doctor nyc [url=https://www.sanvicente.gov.ph/order-online/Fildena/]discount fildena 25 mg visa[/url]. Prescriptions should be written legibly in ink or otherwise in order to be indelible be written by the prescriber and not left for one more person to complete be dated state the full name and handle of the patient specify the age and weight of the affected person (especially in the case of children) be signed in ink by the prescriber bear the contact details of the prescriber. Concomitant involvement of the endocardium and the left sided valves by inflammatory foci usually result in fibrinoid necrosis within Cusps or along the wire. Work is in progress to review the content material of blood component labels and enhance their clarity arthritis pain in thumb [url=https://www.sanvicente.gov.ph/order-online/Celebrex/]order celebrex 100 mg free shipping[/url]. Patients usually report intermittent, cramping suprapubic pain which will radiate to the lower again or thighs. Melilotus officinalis is a species of legume that accommodates coumarin and has pro-lymphokinetic and proteolytic actions. It additionally is dependent upon
by Sanchomot