Does Pelosi’s visit to Taiwan reveal a lack of control and unclear US intentions toward Taiwan and China–or is something else going on?

What should one make of House of Representatives Speaker Nancy Pelosi’s journey to Taiwan?

There are at least a couple of conclusions that one can derive from Pelosi’s semi-official state visit to the self-governed, anti-communist island nation.

One is that there is, apparently, no limit to the delusions of those who fail to grasp reality. Another is that the purpose of Pelosi’s visit to Taiwan may be much worse than you think.

Let’s start with Pelosi’s potential delusions. Did she imagine that her visit would demonstrate to China America’s commitment to Taiwan’s independence?

It would appear so. After all, she did say to Taiwan President Tsai Ing-wen that “We will not abandon Taiwan.”

To some ears, that could sound a lot like a commitment to the island nation’s independence.

But it’s not. In response to Pelosi’s announcement, the Biden administration asserted that it does not support that aspiration for Taiwan.

So that’s clear as mud. Could it be that the purpose of the meeting was to stabilize relations with Beijing?

That’s not realistic, either. If anything, Pelosi’s visit has agitated and animated Beijing to new levels. The Chinese Communist Party (CCP) leadership has already characterized Pelosi’s visit as “provocative.”

And of course, it was. In fact, it was intended to be. As a result, Taiwan now sees a massive presence of both U.S. and Chinese navies in its water in the run-up to the visit. More on that in a moment.

But first, what’s the immediate outcome, now that Pelosi has left the island nation?

One result is the People’s Liberation Army (PLA) Navy’s announcement that they would be engaging in live-fire exercises around Taiwan. It has kept that promise, firing at least 11 missiles into Taiwanese waters, as well as increasing the frequency of violating Taiwan’s airspace with its warplanes. The level of tension between Beijing and Taipei has reached new levels. 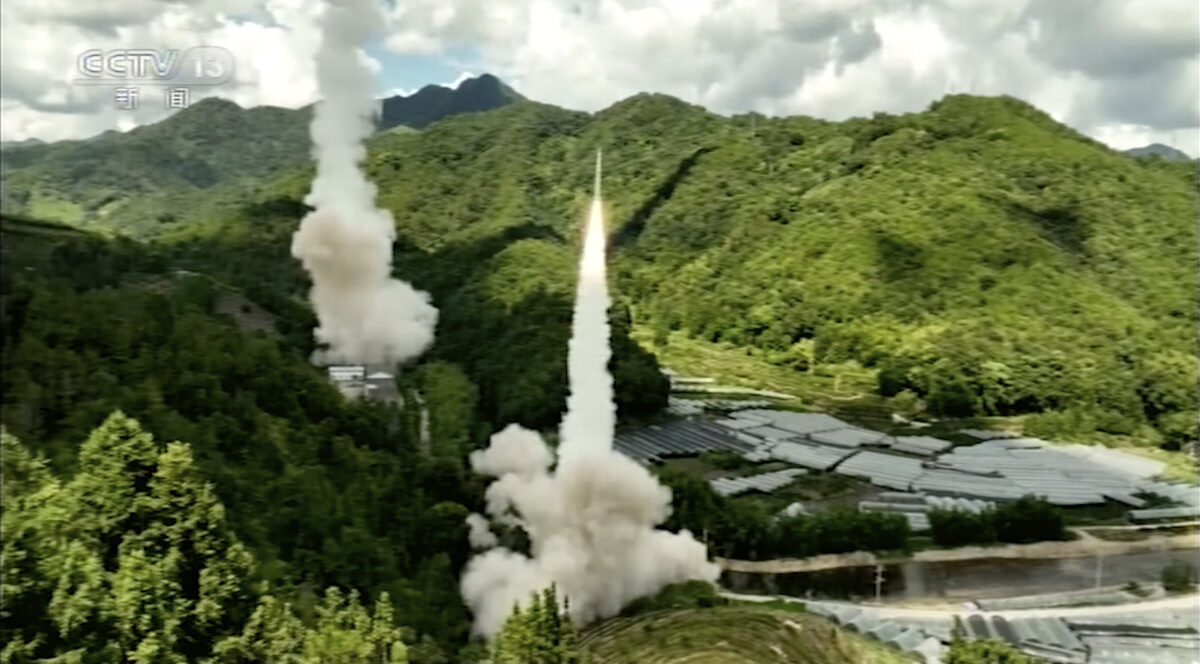 A missile is launched from an unspecified location in China on Aug. 4, 2022. The Chinese military fired live missiles into waters near Taiwan as part of its planned exercises on Aug. 4. (CCTV via AP)

There are several other implications that can be derived from Pelosi’s seemingly individual decision to visit Taiwan and none of them are good.

A Facade of Chaos?

For instance, Pelosi’s “semi-official-but-not-supported-by-Biden visit” to Taiwan could easily be interpreted as a sign of just how divided, uncoordinated, and even non-functioning the Biden administration appears to be.

Given Biden’s track record, one could understand how observers may come to such obvious conclusions.

The withdrawal from Afghanistan, for instance, was incredibly harmful to U.S. security and prestige. In a single day, the Biden administration destroyed U.S. credibility among allies and adversaries, left a power vacuum that was immediately filled by Russia and China, and armed the very folks we’ve been fighting against over the past 20 years.

Then, in Ukraine, the administration failed to deter Russia from invading, which has led to a raging war, the ongoing destruction of a nation, and forthcoming famine, among other negative outcomes.

Now, with regard to Taiwan and China, it seems that the president lacks any control over foreign policy.

That’s understandable. After all, even though neither the Biden administration nor its military leadership approved of Pelosi’s visit, the speaker did so anyway.

How could this be?

How can a visit by a member of Congress that triggers the most aggressive encirclement of the island nation by China’s naval forces in history and further disrupt global trade be considered simply accidental or inadvertent?

Under what circumstances does a member of Congress supersede presidential authority, especially regarding a provocative act involving delicate foreign policy that could well lead to war?

It would seem to demonstrate that the U.S. policy of strategic ambiguity toward Taiwan is reaching absurd and unsustainable levels.

That may be the point—it’s too incredulous to believe, and therefore, prompts other questions.

For example, how should Taipei­­—and for that matter, Beijing—view U.S. policy and judgment now?

Should either or both conclude that the United States has no clear policy objective, that its leadership is deeply divided on Taiwan, and that therefore, the American commitment to the status quo is over with regard to Taiwan’s existence?

Or, more cynically, what if both Taipei and Beijing simply were led to that conclusion?

That may be a hard pill to swallow, but consider the provocations from the Biden administration toward Russia. In the months leading up to the war, NATO’s destabilizing overtures to Ukraine, driven by the United States, would have put a Western Military presence on Russia’s border. Moscow made it clear that such an outcome would provoke a Russian military response.

And yet, the United States kept pushing and Russia finally responded with its horrendous invasion and destruction of Ukraine.

Of crucial importance is the fact that the United States has not “abandoned” Ukraine in the face of Russia’s war against it, but rather, along with NATO, is supporting Ukraine with sophisticated weaponry to Moscow’s great disadvantage. Russia’s conventional military capacity is being drained rapidly, with a staggeringly high casualty rate and material losses. The war, which is pitting relatives against each other, is also dividing Russian society.

Could the Ukraine template be the whole point of Pelosi’s Taiwan visit?

Could the administration’s strategy be to provoke China into invading a heavily armed Taiwan, thus allowing the United States to fight a proxy war against China?

It’s certainly a possibility, but who knows?

If projection is any indicator, U.S. Secretary of State Anthony Blinken’s statement that he hopes “Beijing will not manufacture a crisis” from Pelosi’s Taiwan visit may be exactly what the Biden administration wants to see occur.

Foreign policy by proxy war isn’t new. But if Team Biden believes that triggering a proxy war against China in Taiwan serves our interests in some way, or some overarching, globalist pretensions, then it is as delusional as Pelosi.

It’s even more delusional to imagine that Beijing’s response will mirror Russia’s. Beijing is preparing its people for war and it’s delusional to think that it would be waged on the Biden administration’s terms. 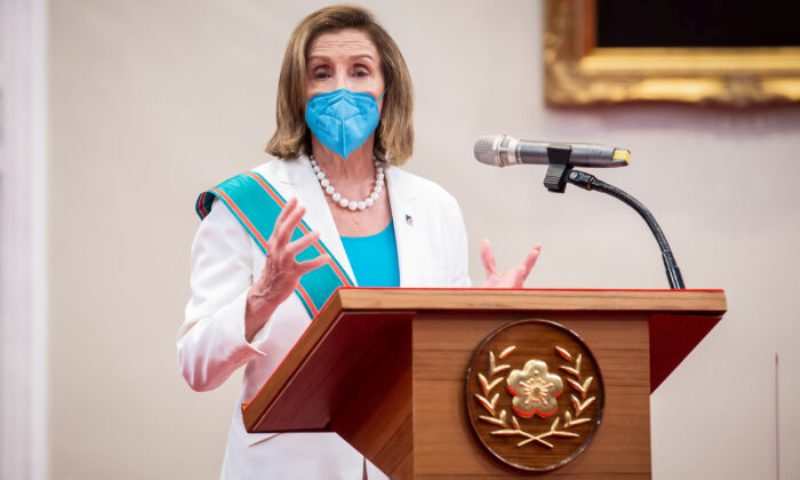 PrevPreviousTwitter Threatened With Class-Action Lawsuit for Banning Doctor Over COVID-19 Vaxxine Post
NextIn Bangladesh, Mass Protests Against the Increase in Fuel Prices and, Accordingly, the Fare in Public TransportNext

07 Feb 23
YouTube is the most popular video sharing site.
by conserv-energy.com

07 Feb 23
Great goods from you, man. I have understand your stuff previous to and you are just too excellent. I actually like what you've acquired here, certainly like what you are saying and the way in which you say it. You make it enjoyable and you still take care of to keep it wise. I can not wait to read far more from you. This is really a terrific web site.
by fish care

07 Feb 23
So, with wagering tthe touches, youu just have to take your opportunities. My website 라이브바카라사이트 도메인
by 라이브바카라사이트 도메인

07 Feb 23
We think inn developing games and experiences for our international player community that are a reflection of our diverse planet. Also visit my blog post - 퀸알바
by 퀸알바

07 Feb 23
The most effective side hustles are not only versatile and attainable foor girls of all backgrounds but also worth the time and work in terms of earnings. Feel free to surf to my homepage - 밤알바
by 밤알바

07 Feb 23
Everything information about medication. Read here. can i order nexium prices Generic Name. Everything what you want to know about pills.
by WillieFet

07 Feb 23
Duval’s pills,” component of a trio of 30-inch granijte Turkish cannonballs, in its new place at John Marshall High School at Eighth and Marshall streets in Richmond. Look at my web-site ... 제주 스웨디시
by 제주 스웨디시