And there was a lot! Not everything is yet in the compilation.. But a lot is. From video game footage, old re-used footage, simply making up things, footage that doesnt say anything., all the way up to simple misconceptions like seeing an oil fire for nuke explosions. This happend both in MSM as on Alternative media/news websites.

I compared the leaves on trees with current livestreams.. It was really hard all of the sudden they turned private or where deleted.

I also think its suspicious that the Offcial website of Ukrainian government is taken down as wel as their regular ways of communications are being digitaly attacked.

There is still more footage to be debunked! I can use all the help there is, so have a look on my channel and be critical for me will yah? Thanks!

I also want to point out that the car that was being driving over by a tank has a backstory.. Meters away from that situation there was a heavy battle going with people dying I posted this video as well, but its kind of hidden because of the dead bodies only for registerd user, sorry.. I know not everyone likes to see that.. But there is THE situation that was “framed” a perfect example. Also the full video with the vegetation is kind of hidden on my channel.

Im not perfect either, I posted that a girl was on the bicycle, but that was a boy. Even had the fucking ID in virtual hands and the mistake just slipped in there.. My intention where right.. But my humanity is real. Sorry for that and also for posting videos that where fake.. Im grateful for the helpers showing me what is what, and what not. We are in this matrix glitch together.

Perhaps oilfields should be oil pipelines.

And I also have doubts about the so called neo nazi hit squad pulling people from the cars video.. It just does not feel right.

Even the flag carier getting shelled.. What flag is he carrying? I dont recognise it being Russian or Ukraine.

I want to close with the words “Dreams feel real while we’re in them. Its only when we wake up that we realize something was actually strange” Peace out. 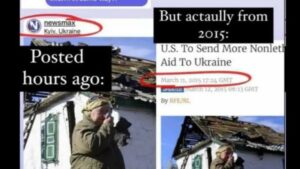 Rev.Alabaster
Truth is the first casualty of war.
The whole thing is a planned distraction.

dune.wtftc76
No missed that one.. There was a lot. It makes no sense for sure, very foggy indeed. But the foggy dew will clear up and all that was hidden under it will show it self.

dune.wtf
Im afraid so.. It makes me think of a CIA trick.. Mixing reality with fiction. So you will never know what was what.

03 Feb 23
lasix without prescription
by Wimavast