Here is an example of laughable lying news by mainstream media

US intelligence has detected evidence that Russian troops amassed close to the border with Ukraine have received actual orders to proceed with an invasion, according to news reports.

CBS News was the first to report on Sunday that the Kremlin had given the green light to commanders among the more than 150,000 troops in potential attack positions.

“Commanders on the ground are making specific plans for how they would manoeuvre in their sector of the battlefield,” Face the Nation reported.

The New York Times also said the Kremlin had ordered an invasion. That intelligence prompted Joe Biden to say this week that the Russian president Vladimir Putin had decided to go ahead with an attack, the newspaper said.

Antony Blinken, the US secretary of state, told CBS the Biden administration remains convinced that Russia is pressing ahead with attack plans.

“As President Biden said, everything we are seeing tells us that the decision we believe President Putin has made to invade is moving forward,” he said.

Pressed for details of why the US continues to believe an invasion is imminent despite repeated Russian denials, Blinken pointed to what he called “provocations” and “false flag operations” that could be used as justification for such a move.

Russian-backed separatists have increased shelling in east Ukraine in the past few days. Blinken said that could be used as a pretext.

“Now we have the news just this morning that the ‘exercises’ Russia was engaged with in Belarus, with 30,000 forces, which were supposed to end this weekend will now continue because of tensions in eastern Ukraine – tensions created by Russia.”

Russia has deployed at least 150,000 ground forces near Ukraine

Blinken’s interviews came amid a swirl of diplomatic activity that offered little clarity. As the top US diplomat was warning that Russia was moving ahead with invasion plans, Putin and the French president, Emmanuel Macron, were agreeing to push for a ceasefire in eastern Ukraine.

Moscow on day of Blinken-Lavrov security talks<br>MOSCOW, RUSSIA – JANUARY 21, 2022: A national flag flown outside the US Embassy on Novinsky Boulevard on the day Russia’s Foreign Minister Sergei Lavrov and US Secretary of State Antony Blinken are scheduled to meet for security talks in Geneva. Vladimir Gerdo/TASS (Photo by Vladimir Gerdo\TASS via Getty Images)
US embassy in Russia urges Americans to have evacuation plans
Read more
Later on Sunday the US embassy in Russia warned Americans living in the country to prepare evacuation plans. It said there was a risk of attacks on Moscow and other major cities, and on Russian territory along the Ukraine border.

“There have been threats of attacks against shopping centers, railway and metro stations, and other public gathering places in major urban areas, including Moscow and St Petersburg as well as in areas of heightened tension along the Russian border with Ukraine,” the embassy said.

Lloyd Austin, the US defense secretary, told ABC’s This Week the extent and type of military capability built up by Russia along the border could support a swift attack on the Ukrainian capital, Kyiv.

“I don’t believe this is a bluff,” he said. “[Putin] has assembled the right kinds of things you would need to conduct a successful invasion.”

In Washington, Biden convened a meeting of the national security council and, the White House said, spoke to Emmanuel Macron, the French president who has staged talks with Putin. The White House also cancelled plans for Biden to go to Delaware for the Presidents’ Day holiday.

Blinken had just returned from Munich, where he accompanied Kamala Harris, the vice-president, to a security conference. The secretary of state is scheduled to meet the Russian foreign minister, Sergey Lavrov, in Europe next week, but has stipulated that the encounter will be cancelled if an invasion occurs.

On Saturday, the Ukrainian president, Volodymyr Zelenskiy, was sharply critical of allied leaders for waiting to impose sanctions until after any bombardment began. He accused world leaders of “appeasement”.

“You’re telling me that it’s 100% that the war will start in a couple of days. Then what are you waiting for?” he said.

Asked by CBS to respond, Blinken said: “We have put together in great detail the massive consequences that will befall Russia if it engages in this aggression.

“The purpose of that is to deter the aggression, and once you trigger the sanctions you lose the deterrence.”

Russian officials continued to insist there were no plans to invade. Anatoly Antonov, the Russian ambassador to Washington, told CBS the massive operation was limited to “sovereign Russian territory” – glossing over sizable forces and drills in Belarus.

President Vladimir Putin meets with French President Emmanuel Macron in Moscow.
Macron paves way for potential Putin-Biden summit on Ukraine crisis
Read more
“We don’t threaten anyone,” Antonov said. “We have our legitimate right to have our troops where we want on Russian territory.”

The ambassador added that the goal was to achieve “legally binding guarantees for Russian security” and to stop Nato expansion on its borders.

“Nato is not a peace-loving NGO,” he said. “It’s a political-military machinery or block. We would like the United States to withdraw their troops and weaponry from those states because it’s our life, our guarantees for security for our people.”

The Nato general secretary, Jens Stoltenberg, told CBS there were no immediate plans for Ukraine to join the alliance and stressed that any such decision would fall to the Ukrainian people.

But he said that Nato had increased its collective defense presence towards the east in recent years and added: “We are ready to further re-enforce that.” 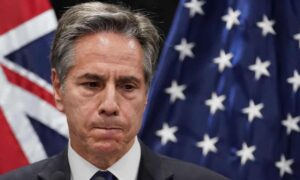 PrevPreviousCoinbase CFO Just Dumped 100% of His Stock and the CPO 97%. What Do You Think This Means?
NextThey Knew It Would Kill…Next