It’s with regret and some trepidation that I take issue on a legal matter with someone whom I like and respect as much as I do Andy McCarthy, the prominent legal affairs commentator and contributor to many publications, websites, and television programs. But like many other intelligent and otherwise convivial people I know, he’s unfortunately incapable of speaking or writing rationally about Donald Trump.

McCarthy has a particularly baneful influence on the discussion of Trump-related issues because he naturally brings to it the gravitas of his legal expertise and apparently authoritative articulation. But this is the same McCarthy who wrote to me five years ago that he had taken a “deep dive” into a lot of confidential material and concluded that Trump was guilty of serious misdeeds in his relations with the Russians.

And, as with other intelligent and otherwise likable people partly propelled through each day by an almost pathological hatred of the former president, when the Russian argument evaporated without a trace, not a word of remorse, embarrassment, or even inferable acknowledgment of a mistake followed. It was briskly on to the next conjuration of Trumpian outrages and delicts.

On the National Review website on Sept. 24, McCarthy fired the most unrigorous and imprecisely directed broadside that I have seen from him on this subject. He wrote that Trump was obviously guilty of an indictable offense in the document controversy that led to the FBI’s ransacking of his Palm Beach home.

It wasn’t precisely stated what offense he committed, but it seemed to be willful noncompliance with a subpoena requiring the production of certain documents that had been wrongfully removed and about which the former president was allegedly trying to clear himself from such a charge by a defense imputed to him by McCarthy of determining in his own mind that the relevant material was declassified because he wished it so and in accordance with a doctrine of automatic declassification of certain matters that he had promulgated among his staff but of which staff members were, according to McCarthy, unaware.

In fact, as McCarthy knows, declassification isn’t really relevant to whatever case the Justice Department may think it has.

To formulate this case against the former president is itself a reduction of the subject to absurdity. There has been no suggestion, other than by the Trump-hating media, that the former president was careless with highly confidential material that could affect U.S. national security, and the photograph issued by the Department of Justice of a range of documents marked classified, spread out on a carpet of the former president’s home, as if he had left them in that place himself, is indicative of the desperation of the DOJ to cooper together some plausible complaint from the farrago of nonsense that it has stirred up.

A departing president can take copies of whatever he wants, as they were in his custody in an official capacity; he has an unlimited security clearance, and he can declassify, explicitly or otherwise, anything in his possession while he’s president. McCarthy’s laborious and slightly pedantic assault upon his caricatures of several of the ex-president’s counsels’ defense arguments don’t in themselves approach the necessary threshold of indicating that a crime was committed.

The fact that McCarthy’s piece is substantially nonsense doesn’t for an instant mean that it isn’t interesting, useful, and timely. He delivers the customary Trump-hater’s ex-cathedra assertions of the emptiness of the Trump argument that the 2020 presidential election was rigged, and, as usual, even with the most distinguished of such people, he completely avoids the principal arguments that make that case.

The unconstitutionality of many of the voting and vote-counting methods, particularly in the swing states of Arizona, Georgia, Michigan, Nevada, Pennsylvania, and Wisconsin, which are the basis of the “Big Steal” argument, is completely ignored. Instead, and despite McCarthy’s commendable loyalty to his former boss, Rudolph Giuliani, he busies himself ridiculing that effort with justified acerbity. The Giuliani claims weren’t substantiated, and even if they had been, they weren’t consequential.

As many, myself included, have written and said publicly, Trump has himself to blame yet again for many of these problems. He foresaw and publicly warned of the dangers of ballot harvesting, but did nothing effective to prevent it, was late responding to it, and allowed his contestation of the election to be colored and discredited by what was, and as McCarthy and many others of Trump’s enemies have declared, essentially just a legal trick-or-treat show.

The airtight sacred oath of secrecy that the entire American national political media have spontaneously taken that 2020 was an unquestionably fair presidential election is an astounding and possibly unprecedented act of mass denial of the obvious by a huge group of well-informed people, many of them of upright character and high intelligence; perhaps someday it will be adequately explained.

Everyone knows that there were potentially millions of harvested ballots that weren’t verified as authentically reflecting the voting preference of a real voter. And everyone knows that the judiciary at all levels refused to hear any of the cases that could have altered the election result. There were 19 of them, including the direct lawsuit of the attorney general of Texas in which he was joined by 18 other state attorneys general against the states that the plaintiff alleged had failed in their constitutional duty to ensure that national elections were conducted fairly in their states.

For McCarthy to fail to present any rebuttal of the real argument over the authenticity of the 2020 presidential election result is very telling.

But the most welcome revelation in McCarthy’s treatment of this ludicrous pseudo-legal gasconade is his sympathetic summary of the challenging strategic and executive decision that the Democratic presidential reelection campaign leaders must make.

These are, first, that as prosecuting Trump might knock him out as a presidential candidate in 2024, and he’s the candidate the Democrats would most like to face, should he be indicted? And, second, if he is, would it cause inconvenient emphasis on the inconsistent treatment of Trump and Hillary Clinton, who was allowed to swan through the egregious destruction of subpoenaed evidence that McCarthy tacitly acknowledges was an infinitely greater offense than anything Trump did?

McCarthy must realize that this confirms what practically every serious observer has long recognized: that this is a straight political question. It was a political decision to invade the former president’s home, and is a political decision whether to lay a (likely spurious) charge. Before taking that decision, the Democratic Party strategists will presumably notice that, contrary to what McCarthy writes, the case, on anything we have seen so far, is a Swiss cheese, and proceeding with it could leave the political managers of this administration in a state of almost ineradicable disgrace. Presumably, somebody in authority might still be disposed to think of such considerations.

Whatever they decide, they shouldn’t imagine that, if he chooses to seek reelection, Trump will be easy for this administration to defeat whether he’s charged over the Keystone Kops affair at Mar-a-Lago or not. 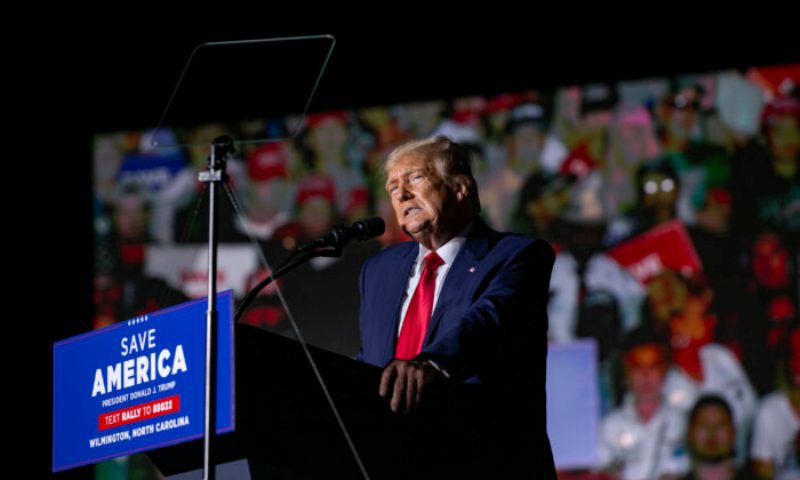 PrevPreviousSituation Update, Sep 28, 2022 – All Signs of Nord Stream Pipeline SABOTAGE Lead Back to Ruthless Biden Regime
NextThe Gateway Pundit Have Published a Map and List of Known Locations of Food Manufacturing Plants that have been Destroyed in the United States, and Some from OverseasNext

30 Nov 22
What a nice place to share thoughts but the most important that thoughts are positive and realistic. נערות ליווי בתל אביב
by lSorse

30 Nov 22
it! Your writing style has been amazed me. Thanks, quite great article. Windkraft
by Erneuerbare Energien

30 Nov 22
Hi there I am so delighted I found your weblog, I really found you by accident, while I was browsing on Aol for something else, Regardless I am here now and would just like to say thanks a lot for a marvelous post and a all round enjoyable blog (I also love the theme/design), I don’t have time to read it all at the minute but I have book-marked it and also added in your RSS feeds, so when I have time I will be back to read a lot more, Please do keep up the great work.
by https://gotartwork.com/Profile/nha-cai-fb88/185179/

30 Nov 22
Dude.. I am not much into reading, but somehow I got to read lots of articles on your blog. Its amazing how interesting it is for me to visit you very often. -
by ﻿vigrx plus coupon code