Graham Hancock is a British author and former journalist. He is known for his controversial views on the possibility of a lost advanced civilization of the Ice Age, and his investigations of cataclysmic Earth changes, megalithic architecture, altered states of consciousness, ancient myths, and astronomical data from the past. He is the author of many extraordinary, best-selling books, such as “America Before”, “Magicians of the Gods”, “The Sign and the Seal”, “Fingerprints of the Gods”, “Heaven’s Mirror”, “Underworld”, and “Supernatural”. 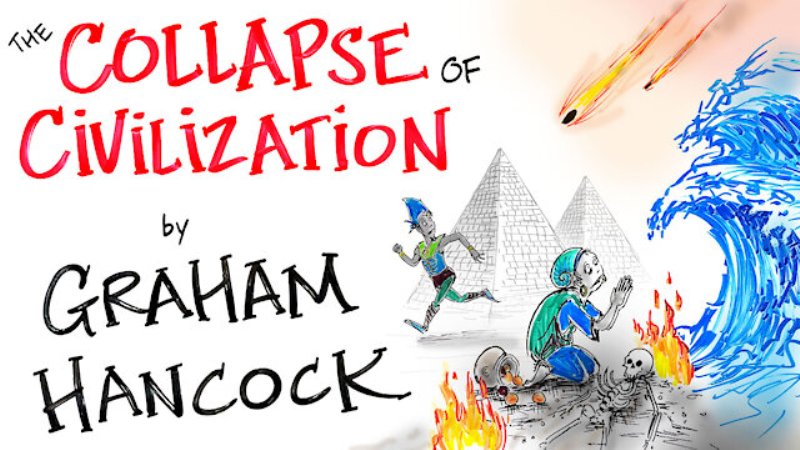 CancelBack
we have certainly lost our civilization and the Biden crime family is right on top of creating more greed and hate.

Thatflyguy
Rifle, shotgun, 4WD..
I can skin a buck, and run a trout line..

M1P
You need to read Genesis and Exodus. God is in control. It’s a great time to put your hope in Jesus Christ and restore your relationship with your creator. Peace be with you all!

Thatflyguy
I tried church, but find it doesn’t work for me. I am a true believer though. I just also believe that the church has twisted the gospel in some ways to feed it self power. I will follow the words of that carpenter all day, but I will never bow to a holy house built of gold.

Charliewine
With Joe in charge we will collapse any time soon.

Maranatha_Mark
Rednecks and cockroaches will survive, Of course!!! Yes, I am a REDNECK, and proud of it!

Thatflyguy
I’m Cajun married to a redneck. There aint a damn thing we can’t catch, grow, or eat.

ICEBROOD
The problem is the COCKROACHES are the Billionaires with all the DUMBS and funds and resources. They are wiping us out for a reason and have been using humanity as slaves to prepare for it for centuries and it ain’t looking great for survivors on the other side unless you are part of the ‘CLUB’. And as George Carlin warned us of years ago…’You ain’t in it’!!

DCM7124
He’s right, on some points, wrong on others. One thing that I agree with is the way that dumbing-down and division have formed because of social media. His comment about “exclusionary religions” rings false w.r.t. Christianity, however. Jesus in fact prayed for unity, and for men to come to a knowledge of the truth… and He is the truth. All complete peace, justice and righteousness is in Him. So, call religions “exclusionary” if you so desire, but don’t include belief in Jesus Christ in that list.

WorkingClassHeroes
The Amish will barely know that we passed after a couple years…just a sad memory of a society gone wrong. They rejected technology and we thought it odd that they chose to be separate.

karlbrea
The only way we can go forward. Is to go back. Back! To the shadows again! pull the plug on them. they want to depopulate? lets depopulate them!

rmbl1dme123
Those who scream virtue with a latte in their hands don’t know how to even consider survival.

27 Jan 23
The following are the most important categories applied to classify casino games. my page: Gordon
by Gordon

27 Jan 23
Fastidious response in return of this matter with real arguments and describing all about that.
by https://www.aacc21stcenturycenter.org/members/blog18/profile/

27 Jan 23
Hi there, I found your website by the use of Google at the same time as looking for a similar subject, your site came up, it appears to be like good. I have bookmarked it in my google bookmarks. Hello there, simply was aware of your weblog through Google, and located that it's really informative. I am gonna be careful for brussels. I will appreciate when you continue this in future. Many other people shall be benefited from your writing. Cheers!
by slot deposit qris

27 Jan 23
Hello to every single one, it's genuinely a nice for me to go to see this web page, it contains useful Information.
by Beylikdüzü Escort