This is how they start messing with people’s minds, they try to blurr the unblurrable lines, they place doubt in the absolutely defined. They are psychopaths trying to convert humanity into soulless transhumans.

Don’t let them mess with your head. Reject all notion of anything that goes against what we all know intrinsically, to be human.

They know that as long as we are what The Creator made us to be, they will never be able to fully posses and control us. This is why they are trying to genetically modify us and blend us with AI.

Transhumanism is Satan’s way to destroy God’s divine creation, it’s as simple as that. 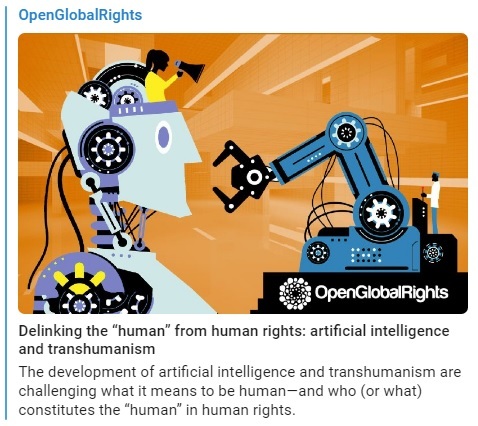 Delinking the “human” from human rights: artificial intelligence and transhumanism

The development of artificial intelligence and transhumanism are challenging what it means to be human—and who (or what) constitutes the “human” in human rights.

Human rights frameworks are deeply embedded in a discourse that privileges the human in human rights. However, conceptions of what constitutes the human are being eroded through the development of artificial intelligence (AI) and transhumanism, both of which support the emergence of new kinds of humans.

Scholars that have begun to examine these questions employ the human/non-human binary to argue that it may be beneficial to expand human rights to incorporate the non-human machine, and that the Universal Declaration of Human Rights could possibly extend to some sentient non-humans. While these perspectives are incredibly valuable in shaping the debate around AI and human rights, some fundamental questions remain unanswered.

First, who is the human in human rights? The debate thus far assumes that we can distinguish fairly easily between a human being and a non-human machine. However, this binary becomes increasingly complex when we acknowledge that not only are machines evolving toward humanness, but that humans are simultaneously evolving toward machines.

For instance, AI has fueled the idea of “transhumanism”—a movement predicated on the belief that we should use technology to control the future evolution of the human species. Transhumanists seek to radically extend life by engineering immortality through technology. Consequently, as humans evolve toward machines, one could imagine the development of cyborgs that have mechanical elements built into the human body to create a combination of flesh, blood and microchips. The Cyborg Foundation has already created a Cyborg Bill of Rights that include “equality for mutants” which provides that “A legally recognized mutant shall enjoy all the rights, benefits, and responsibilities extended to natural persons.”

At the same time, the idea of a “legally recognized mutant” raises a second question: who gets to decide who is human and who is not? This question, which is connected to the power to grant the (legal) status of human, should be understood in the broader historical context of how the category of human first emerged as a way of delineating between god, man and animal. The idea of the human therefore remains deeply embedded in a colonial discourse centered on the white, European man that has historically excluded women, black people, queer people and people with disabilities among others.

Drawing on Sylvia Wynter’s work on the construction of the human, Walter Mignolo asserts that the category of human was developed in order to distinguish between “entities that were lesser than or nonhuman”. Mignolo engages with the question of what it means to be human to demonstrate how decolonial thinking can break down the idea of “human” to reveal its true meaning. Once the meaning of human is revealed, Mignolo finds: “…I do not want to be human. But instead of rejecting its content and simply adding a prefix (posthuman), decolonial thinkers start by asking how these concepts came into being: when, why, who and what for?”

Consequently, if we recognize that the category of human is deeply problematic because of its historical construction, as well as inadequate in relation to its futuristic application, then instead of trying to expand the category of human, it may be more prudent to delink the human from human rights. By employing decoloniality as a framework that seeks to delink from dominant Western sources of knowledge, “decolonial options” can be developed to reconstitute our understanding of human rights. This process, according to Tlostanova and Mignolo, “places the problem or problems to be addressed (and not the object or objects to be studied) in the foreground”. For Tlostanova and Mignolo, the project of developing a decolonial option should be led by “social actors Frantz Fanon referred to as ‘les damnés de la terre’ (1967); all those humiliated, devalued, disregarded, disavowed, and dealing with the ‘colonial wound’”.

As a result, Salil Shetty’s call to decolonize human rights and César Rodríguez-Garavito’s assertion that human rights requires reimagination informed and supported by alternative frames of justice, compels us to consider whether the human in human rights may be constraining the future direction of rights discourses. Adopting a decolonial approach could assist in the reimagination process that Rodriguez-Garavito asks us to engage in and that we are increasingly forced to confront because of technological developments such as AI. Instead of limiting our imagination to a human centered rights discourse that is struggling to fit enhanced humans and sentient machines into the category of human, perhaps it is time to delink the human from human rights.

PrevPreviousLanguage Warning. Footage Out of New Zealand of Protest Site Reportedly Destroyed by What the Man Recording Describes As “Rent-a-Cops”
NextHow Is It Possible That European Countries, Germany Especially, Allowed Themselves To Become So Dependent on Russia Over the 30 Years Since the End of the Cold War?Next

03 Feb 23
motilium for sale
by Booavast