It’s time you had your own private social network.

If you’re into writing and reading, few games on the internet are more fun than Twitter at its best. The witty one-liners, the quick retorts, the spectacular insults—it’s a heady cocktail for wordcels. But while we may be convincing ourselves that we’re participating in discourse in the public square, we’re actually in a cage, making a spectacle of ourselves for little more than weak dopamine hits and a few pretend friends. The real prizes go to Twitter itself, now under the control of Elon Musk.

When you publish your thoughts on Twitter, you are doing labor for that company. Yes, you get followers, but you can’t take them with you. Unless you count Super Follows (do you?), they can’t pay to support you, either. You’re the product, not the customer. Twitter needs your mind so it can satisfy its real customers: advertisers.

But we think there can be something different.

We’ve been saying that Substack is about more than just newsletters and that the communities people are building on this platform are like private social networks. We’re only beginning to execute on an expansive vision of a new media economy, one that will be richer, more valuable, and more exciting than any that has come before it. And we’re moving fast. In the coming days and weeks, we’ll release a slew of new features that allow writers and readers to hang out with each other, reference each other, share each other’s work, and show their status on the platform.

We believe that the next era of the social internet will be about deep relationships over shallow engagement; signal over noise; and ownership over serfdom. When people have the power over platforms, rather than the other way round, we can have more rewarding social experiences and healthier discourse, where we seek to understand our neighbors rather than score points against them. When the network is funded by paid subscriptions, not ads, trust relationships trump viral content.

The Substack model allows for a different view of social networking because it’s based on new rules. We should all be uncomfortable with the idea that a singular figure can hold dictatorial influence over a social platform that ultimately derives its power from the collective contributions of its participants, who don’t get to share in its riches. We’re not into the idea of a handful of social networks utterly dominating the collective consciousness, but we’re very into the idea of millions of writers and creators having more control over the social internet, specifically in the form of their own spaces where they set the terms of engagement. That kind of dynamic represents the old promise of the internet, where power accrues to the people. That we have somehow reached the point where digital powers go exclusively to already-dominant aggregators, an almost irreversible rich-get-richer effect, is a perversion of all that was good about the early internet. This is not what we dialed up for.

Okay, so perhaps we can’t quite build a utopia. Few can honestly claim they will, though many techno-optimists will try. The truth is we’re capitalists just like the other guys—but the way we make money is different. Our company makes money only when you do, which means we are literally invested in your success. What’s more, you can leave at any time. We make it easy. Unlike on Twitter—or any of the other major social media platforms—you aren’t “locked in” on Substack. You can take your content, mailing list, and payments relationships off the platform with a few clicks. That puts pressure on us to keep proving that the value we deliver justifies the fee you pay us. It’s a good pressure—it’s why we build world-class publishing tools that make running a media empire simple; it’s why we take care of customer support on behalf on Substack writers; and it’s why we continue to invest in building network effects into the product. Today, more than 40 percent of all subscriptions and 12 percent of paid subscriptions on Substack come directly from our network.

We don’t think Twitter is going to disappear anytime soon, nor should it. It has its uses, and even cage fights can be fun. But it’s time for a real alternative—one where people, not machines, have control; one where writers and creators can make reliable incomes from the work they do on the platform; one where important conversations can take place with nuance instead of snark. 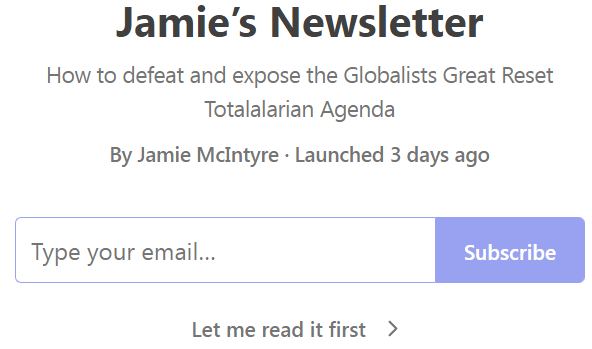 PrevPreviousWhy Climate Change is a Fraud
NextRussian Foreign Ministry Spox, Maria Zakharova, has on Tuesday Stated that the British Government Needs to Respond to a Claim that Liz Truss Sent a Message to US Secretary of State Anthony Blinken After the Nord Stream Pipeline was SabotagedNext

30 Nov 22
I'll immediately grab your rss as I can not in finding your e-mail subscription hyperlink or newsletter service. Do you've any? Please allow me recognize so that I may just subscribe. Thanks.
by aquarium guide

30 Nov 22
Very good info. Lucky me I recently found your blog by accident (stumbleupon). I have book-marked it for later.
by Tubidy

30 Nov 22
Way cool! Some very valid points! I appreciate you penning this post and the rest of the website is really good.
by https://pawoo.net/@vuiup

30 Nov 22
Heya just wanted to give you a brief heads up and let you know a few of the pictures aren't loading correctly. I'm not sure why but I think its a linking issue. I've tried it in two different browsers and both show the same results.
by aquarium guide

30 Nov 22
Hi there, I wish for to subscribe for this webpage to get hottest updates, thus where can i do it please help.
by aquarium