Humanity will move most industry into space and allow only a select few to remain on our planet, which will be turned into a natural resort, according to self-funded space explorer Jeff Bezos.

The Amazon billionaire enthusiastically shared his predictions for what human civilization will look like in the future – with him personally helping to bring that future closer – during a talk at the annual Ignatius Forum in Washington, DC.

He expects vast cylindrical space colonies spinning to create artificial gravity for millions of residents to take over most industrial production. Meanwhile, Earth will be turned into a natural reserve with restricted access similar to US national parks today.

“This place is special, we can’t ruin it,” the founder of Amazon said of our planet.

He said that the colonies themselves “will have rivers and forests and wildlife,” which arguably brought his speech out of the realm of futurology and towards optimistic science fiction. Amazon is infamously resourceful when it comes to squeezing its workers for every drop of productivity. That’s why the similarly rosy description of ‘Amazon factory towns’ solving economic inequality in the US was met with horror, when it was proposed by a Bloomberg columnist in September.

Bezos referred to Princeton physicist Gerard O’Neill, who proposed the concept of space habitats in 1976, as the source of inspiration for him. He said the sort of expansion he predicted was inevitable, if humanity is to grow in a sustainable way.

“This Earth can support, let’s say, 10 billion people to a certain degree. We’d have to work really hard to figure out how to do that without degrading the planet… The solar system can support a trillion people,” he said.

The entrepreneur didn’t comment on who he thinks would decide who gets to live on Earth in the future, when asked by the host of the event, Adi Ignatius. If historic precedent is any indicator, privileges granted by wealth and status may be involved.

The perks of Bezos’ own status as one of the richest people on Earth were discussed in the interview, when Bezos bragged about managing to get a cameo in his favorite movie franchise, Star Trek.

“That was not an easy gig to get,” he said of his appearance in the 2006 feature film ‘Star Trek: Beyond’. “I insisted on a speaking role, which complicated the whole scenario,” he said.

In the movie, Bezos wore alien prosthetics and had one line: “Speak normally.” He said he “nailed it,” prompting laughter from the audience.

Talking about Blue Origin, the billionaire compared his firm to barnstormers from the early days of aviation. He said taking rich tourists on suborbital flights will turn them into “Earth ambassadors,” who would advocate for increasing space exploration in the name of protecting our planet. This will give more resources to making manned space travel routine, similar to how biplanes of old evolved into the passenger airliners of today, he said. 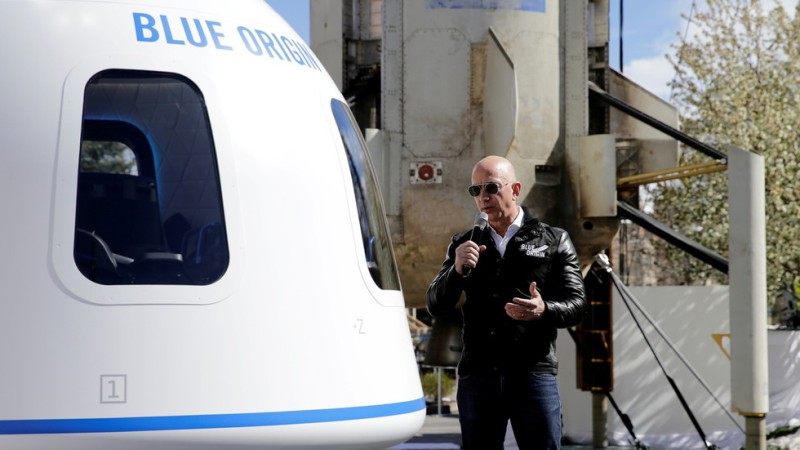 PrevPreviousWhat if Humpty Dumpty Was a Chinese Spy?
NextThe Vaxxinated Are Dropping Dead in Plain View As Fauci and the Media Admit Total Vax Failure… While Pimping More Booster Shots for the GullibleNext

07 Feb 23
I am glad to be a visitor of this perfect blog !, appreciate it for this rare info!
by download movies

07 Feb 23
Great post. Just a heads up - I am running Ubuntu with the beta of Firefox and the navigation of your blog is kind of broken for me.
by news

07 Feb 23
I think I might disagree with some of your analysis. Are the figures solid?
by nba video games

07 Feb 23
I appreciate, cause I found just what I was looking for. You've ended my four day long hunt! God Bless you man. Have a great day. Bye -.
by nba video games