A complaint has been filed with the Prosecutor of the International Criminal Court on December 6th, 2021 by a team from the UK on behalf of the people. They are alleging crimes committed by UK government officials and international world leaders of various violations of the Nuremberg Code, crimes against humanity, war crimes and crimes of aggression perpetrated against the peoples of the UK.

The team who are fighting for justice on behalf of us all state that:

“The seriousness and extent of the crimes committed in the United Kingdom, highlighted by the scope of people that these crimes affect, that these crimes continue to be committed, the wide range of perpetrators, the recurring patterns of criminality and the limited prospects for accountability at the national level, all weigh heavily in favour of an investigation”.

The news of the legal complaint has come at a good time for many.

The perpetrators as listed on the document. below.

The applicants state that they have tried to raise their case through the local English police and the English Court system without success. The team is represented by lawyer, Hannah Rose, with co-applicants including:

This is exactly why the ICC has been addressed directly as if a state is unwilling or unable to carry out either an investigation or prosecution, the ICC is able to prosecute, not to replace national crime systems, but to complement them.

The team of applicants has provided the ICC with documentation detailing numerous claims which amount to violations of the Nuremberg Code, Crimes against humanity, war crimes, and crimes of aggression in the United Kingdom.

Within the complaint, the team argues that“based on the extensive claims and enclosed documentation, we charge those responsible for numerous violations of the Nuremberg Code, crimes against humanity, war crimes and crimes of aggression in the United Kingdom, but not limited to individuals in these countries”.

The applicants state that “It is our intention to present to you and detail how, in the United Kingdom this year, the Government of the United Kingdom, with its Ministers and senior officials have violated the Nuremberg Code not only in a single aspect but in many aspects”.

Through providing an over ten-thousand-word document, the team has gathered extensive evidence that are areas of concern have occurred under the guise of measures or interventions for the prevention of a “virus.”

A particularly notable and important area addressed within this documented complaint, is the fact that the number of covid-19 cases has been artificially inflated due to the inaccuracy and unreliability of the PCR testing.

Arguably, without these inflated figures, there would have been no need for the other measures and interventions that are now be classed as crimes against humanity.

The team highlight the fact that a covid death is recorded if an individual died for any reason within 28 days of a positive Covid-19 test (that was confirmed with the inaccurate and unreliable PRC tests).

The Rebranding of Flu, Pneumonia, and Respiratory Infections.

Additionally, another way the Covid-19 statistics have been artificially inflated is by the ‘rebranding’ of the common influenza, pneumonia, and other respiratory infections as covid -19. The applicants cited data from the ONS which showed that deaths in 2018 from influenza and pneumonia amounted to 29,516 and in 2019, was 26,398.

The documentation also highlights that a freedom of Information request (FOI) shows us that between March and June 2020 the total number of Covid-19 related deaths in England and Wales with no pre-existing health conditions was 4,476.

This argument was further strengthened by John O’loony, a joint applicant on this request is a funeral director running his own funeral home in Milton Keynes. As a funeral director, Mr. O’loony testified that he saw a massive effort made to deliberately inflate Covid death numbers. Cancer patients and stroke victims and even one guy that was run overall ended up with Covid on their death certificate’.

All areas that were arguably a result of the overinflated cases were included in the document to either add weight to the complaint with factual evidence or occurrences or to request a full investigation into particular areas.

Warranting a full investigation, for example, are the vaccinations that are “an innovative medical treatment” that has only received temporary Authorisation.

The vaccines are still in ongoing Phase 3 trials which are not due to conclude until late 2022/early 2023, therefore, the vaccines are experimental meaning there is limited data for the short term and no long-term safety data available.

Additionally, the use of a new, never been approved for human use, mRNA vaccine technology, which is effectively a pro-drug, means that it is not known how much spike protein any individual will produce. The applicants argue, therefore, that “potential late-onset effects can take months or years to become apparent

The Inclusion of Graphene Hydroxide

Also warranting a full investigation according to the team is the inclusion of graphene hydroxide and the alleged assassination of Dr. Andreas Noack, after his video revealing its presence in the vaccines

Dr Andreas had explained what graphene hydroxide was and how the nanostructures injected into the human body act as ‘razor blades’ inside the veins of ‘vaccine’ recipients and that due to the size of the structures they were unable to show up in autopsies. According to the applicants, “toxicologists can’t imagine that there are structures that can cut up blood vessels causing people to bleed to death on the inside so they would not be looking for them, given their atomic size”.

Other Areas and Parallels to 1930s Germany

The team also includes arguments relating to theIneffectiveness of masks,saying that even the World Health Organisation (WHO) has admitted that there is no evidence available on the usefulness of masks to protect non-sick individuals. They also highlight the Alternative treatmentsthat have been ignored, the Censorship,and that the UK government and governments around the world are using the ‘pandemic’ to crack down on free expression and access to information and alarming Parallels to 1930’s Germany as told by Holocaust survivors

There are several survivors of the German Holocaust drawing stark parallels between Covid restrictions and the beginning of the Holocaust. These together with other areas included in the complaint which can be found here are according to the applicants provide “a reasonable basis to believe that violations of the Nuremberg Code, genocide, crimes against humanity, and war crimes have been committed”

The document concludes with a strong request:

“WE WANT TO REPEAT: It is of the utmost urgency that ICC take immediate action, taking all of this into account, to stop the rollout of covid vaccinations, introduction of unlawful vaccination passports and all other types of illegal warfare mentioned herein currently being waged against the people of the United Kingdom by way of an IMMEDIATE court injunction”.

The filing offers hope in a never-ending saga of harmful deception. The documentation is both interesting and very educational, please find the complete document here.

A heartfelt thank you from all of us and Good luck to Hannah Rose and the team! 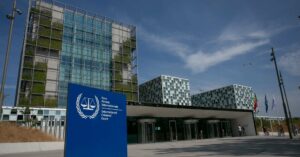 PrevPreviousWhere Are Those Weapons of Mass Destruction Which Were Justified To Invade Iraq for Its Oil and Murdered So Many Based on Lies?
NextForced Vaxxination: Vietnam, a Woman Is Dragged Out of Her Apartment in Front of Her Kids To Get the Death JabNext

27 Jan 23
Great site you have here.. It's difficult to find excellent writing like yours these days. I seriously appreciate people like you! Take care!!
by crypto blender