A prominent restaurant owner will forfeit around $10 million, keeping his 27 stores closed until all restrictions are lifted in Australia’s most populous state New South Wales (NSW).

Rami Ykmour, co-founder of the Rashays restaurant chain in Sydney, announced on Sept. 27 that the business would remain closed until Dec. 1, despite being allowed by the state government to open under an official roadmap to ease NSW out of government-mandated health restrictions.

NSW is the first jurisdiction in Australia to announce an official “Freedom Day” (Dec. 1) that would see most restrictions on vaccinated and unvaccinated individuals removed.

In an interview with The Epoch Times on Oct. 8, Ykmour said he was motivated by two reasons to keep his doors closed. 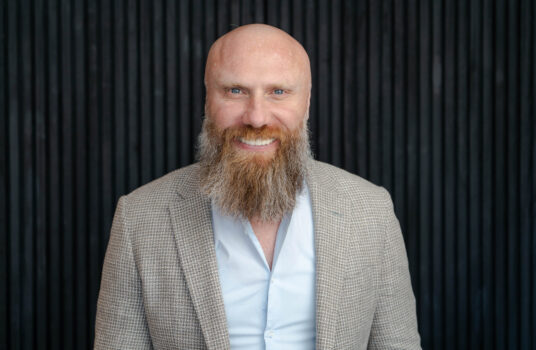 “The first one is obviously a ‘two-tier society.’ That was something I don’t stand for, and I want everyone to have ‘Freedom Day’ on the same day. Number two is the safety of our staff. I didn’t want our staff to become security guards, and police officers in a family restaurant environment,” he said. “I don’t think that’s a role we need to play, and plus, the vaccine passport is not ready, and they’re not in operation.”

“We’ve been in business for 23 years now. We are welcoming to anyone who comes into our business, and our success is based on the fact that you can come in with a pair of shorts or slippers on, and you can feel welcome for dinner. Or you can come in with a nice shirt and nice pants and be treated exactly the same,” he said.

“So, standing at the door and asking people whether they’re vaccinated or not just does not align with our brand,” he added.

Ykmour said Rashay’s could lose around $10 million in turnover over the next two months.

“It’s not about money at the moment. We’ve lost so much over the last 20 months now, and it’s just something that we’ll wear until it’s a one-tier society,” he said.

When asked whether he thought the vaccination issue had become politicised, he replied, “Absolutely.”

“You know you can read on people’s Instagram page or on their Twitter page—vaccinated or unvaccinated—it’s a shame, and I just hope that society can sort of get together again and maybe become one,” he said.

Ykmour said he was optimistic and that even if there was division, things would change, and people would quickly forget and move forward. 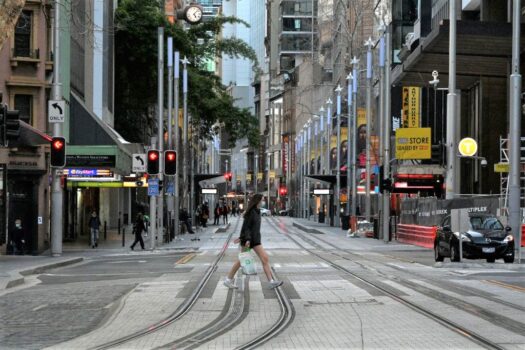 This picture, shows a girl wearing a face mask walking through the empty streets of the central business district in Sydney, Australia, during the lockdown.

“I think there are better days ahead, the losses that we’ve had over the last 20 months—sure, that’s life, that’s business, and it’s not a straight line, if it’s not COVID-19, it could have been something else to our business,” he added.

Australia has enjoyed some of the lowest infection and death rates from COVID-19 by global standards. This, in turn, has spurred state and territory leaders to readily lock down entire cities and close domestic borders at any sign of infections in the country—which has proven politically popular.

Over the past 18 months, NSW has largely resisted implementing blanket lockdowns and has been the only state to keep its domestic borders open throughout the pandemic. Instead, it has preferred to rely on contract tracing and targeted, localised lockdowns to control infection rates.

However, a July outbreak of the Delta variant in Greater Sydney saw a major policy shift.

Within four months, the NSW government’s official policy changed from having limited restrictions to implementing some of the toughest public health restrictions—akin to Victoria’s “Stage Four” measures—including limits on movement within 5km of the home, mask mandates, and the closing of non-essential retail.

In late September, the government revealed its roadmap to “freedom” to gradually open up the state.

Based on the National Cabinet plan, the roadmap will see one batch of “freedoms” made available to vaccinated individuals once 70 percent of the population is vaccinated (Oct. 11). Another set will be released once 80 percent is vaccinated.

New NSW Premier Dominic Perrottet recently announced further changes to the roadmap to speed up the state’s return to normality.

07 Feb 23
It's amazing in favor of me to have a web page, which is useful in support of my knowledge. thanks admin
by Sharyn

07 Feb 23
This diversity offers you an opportunity to specialize in an region that most interests you. Feel free to surf to my web site ... Gladis
by Gladis

07 Feb 23
Hello there! Do you know if they make any plugins to protect against hackers? I'm kinda paranoid about losing everything I've worked hard on. Any tips?
by pizza in dc with delivery