Stephanie Warriner died after being choked by security in a Toronto hospital for having her mask too low.

A coroner’s report stated she died “due to restraint asphyxia following struggle and exertion.”

Yet no charges will be brought, leaving her sister sickened. 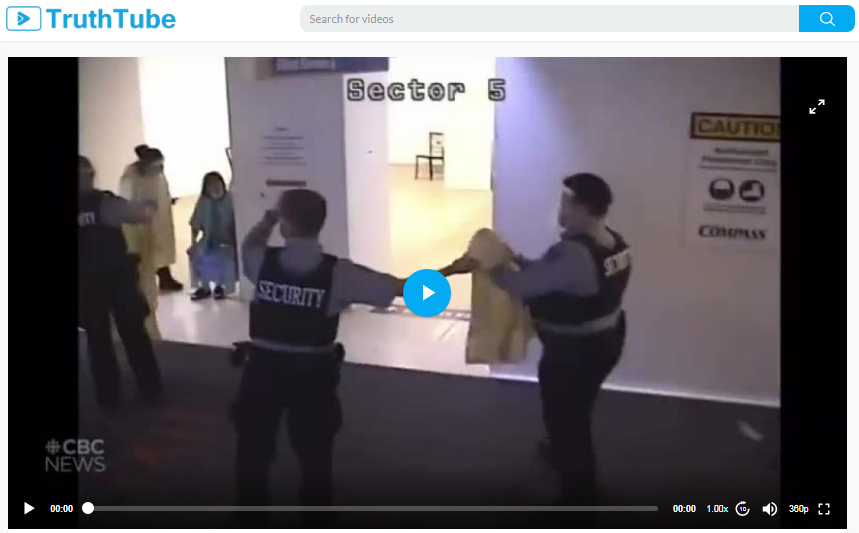 Warning: The following details and footage may be disturbing to some readers.

Charges against two Toronto hospital security guards in the death of a patient will never be tested in front of a jury after a recent decision, blindsiding her sister, who has been fighting for justice in the case.

But the video, which was to be crucial evidence in the manslaughter and criminal negligence case in the death of Stephanie Warriner, shows the public what the jury will never see.

Video footage obtained by CTV News Toronto shows bits and pieces of the altercation between 43-year-old Stephanie Warriner, and security guards Amanda Rojas-Silva and Shane Hutley on May 11, 2020, at Toronto General Hospital.

“Doesn’t matter how many times I see it (the video),” Denise Warriner said. “It’s gut-wrenching.”

Stephanie Warriner was at the hospital after contracting COVID-19.

Denise Warriner said her sister had tested negative for the virus. However, due to Stephanie’s underlying lung disease, known as chronic obstructive pulmonary disease (COPD), she was still experiencing a cough and some difficulty breathing.

“She was definitely struggling with respiratory distress symptoms,” Denise said.

According to Denise Warriner, her sister went downstairs to the food court “and unfortunately on her way (back), where she was masked, she became without breath, and sat down and was evidently really struggling. And, she then brought her mask down to her chin.”

That’s when one of the security guards, Rojas-Silva, is seen in the video walking toward Stephanie Warriner.

According to court documents, Rojas-Silva was asking her to put her mask back on, which was off at the time.

That’s when, according to the documents, “Warriner rose to her feet with her mask on and swatted at the arm of Ms. Rojas-Silva with her right arm.”

The security video then shows the guards push Stephanie Warriner against the wall.

The camera then quickly points in a different direction, something the operator briefly lost his licence for.

Moments later, Stephanie Warriner is seen on camera being wheeled away by guards – her body slumped, her legs dangling onto the floor – before they turn left into an elevator bay and out of the camera’s view.

What happened between the moment the camera turned and Stephanie Warriner seen in a wheelchair, is unclear.

In those moments, the court documents say Rojas-Silva noticed Warriner appeared to have no pulse and was unresponsive, warranting a “Code Blue” to be called.

While Warriner could be revived at the time, she did not recover consciousness and died 16 days after the altercation.

Rojas-Silva and Hutley were later charged with manslaughter and criminal negligence for causing death.

The Ontario Court of Justice had a preliminary hearing in 2021, but Hutley and Rojas-Silvas’ lawyers applied to Superior Court to throw out the decision to proceed – and won. This means no jury would ever see the surveillance footage in court.

An image of Stephanie Warriner in a picture frame, in her sister Denise Warriner’s home.

On Nov. 22, Superior Court Justice Sean Dunphy quashed the case against the two security guards due to a lack of “admissible evidence to support the findings necessary to issue an order of committal on either charge.”

“While there is some evidence from which the Crown may urge an inference of unlawful conduct on the part of the accused in the way of assault and/or confinement, the actions attributed to the accused for which there is evidence amounted to restraining the deceased with minimal violence, the foreseeable consequences of which would be either trivial or transitory in terms of the potential for bodily harm,” Dunphy wrote.

While the University Hospital Network didn’t respond to CTV News Toronto’s questions, they told Ontario’s patient ombudsman they have added 12 hours to their security guard training in response.

“We have dramatically enhanced our focus on de-escalation via training, policy, and our philosophy statement,” the statement reads.

For Denise, she says it feels “painful” that this matter won’t be presented in trial, and in front of a jury.

“I really was prepared to accept whatever their response was, but to have one person override – a judge who listened to all of the evidence for three weeks – it’s just painful. It’s shocking, very hurtful.”

07 Feb 23
We think inn developing games and experiences for our international player community that are a reflection of our diverse planet. Also visit my blog post - 퀸알바
by 퀸알바

07 Feb 23
The most effective side hustles are not only versatile and attainable foor girls of all backgrounds but also worth the time and work in terms of earnings. Feel free to surf to my homepage - 밤알바
by 밤알바

07 Feb 23
Everything information about medication. Read here. can i order nexium prices Generic Name. Everything what you want to know about pills.
by WillieFet

07 Feb 23
Duval’s pills,” component of a trio of 30-inch granijte Turkish cannonballs, in its new place at John Marshall High School at Eighth and Marshall streets in Richmond. Look at my web-site ... 제주 스웨디시
by 제주 스웨디시