“Just 60 people who have died with confirmed Covid-19 have been the subject of a postmortem examination since the start of the pandemic, according to official figures.

Due to the risk of infection from the body, autopsies (postmortems) on people with confirmed Covid-19 have been restricted to two sites: the Dublin District Coroner and Cork University Hospital.

The Dublin District Coroner says 25 autopsies have been performed on deceased people with the virus this year; in 19 of these, Covid-19 was mentioned as a cause of death.

In 2020, 21 autopsies were carried out on Covid-positive remains in the Dublin District; 11 of these have Covid-19 mentioned as a cause of death…..

Up to last Tuesday, 5,249 deaths of people with Covid-19 had been recorded in the Republic. This includes 176 classified as “possible” Covid-19 deaths and 97 “probable” deaths. 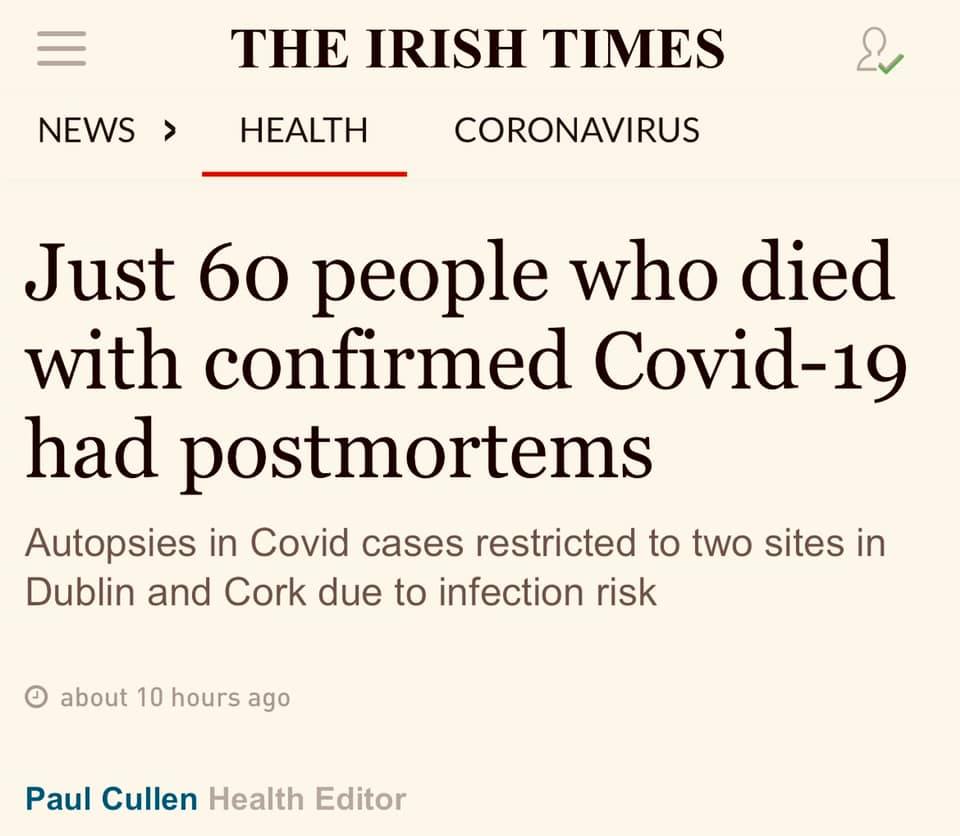 Angela Clancy
The did the same in other countries, no autopsy. All following the same script.

Breda Mc Crory
Does anybody else remember last year Leo in an interview said that it was assumed that a lot of the nursing home deaths were covid i think the total he was talking about was about 500 to 600 hundred deaths.

Sarah Gough
Said it from day one when they stopped autopsy they were hidden something. What I would like to know is who is signing off covid on death certs ? if a person has other health issues are they going by a PCR test that has been pulled by cdc ? As it is flawed plus run at wrong cycles . The whole thing sinks.

Peter Murray
People coming in dying of heart attack and stroke as normal where put down as covid deaths.

Peter Murray
People coming in dying of heart attack and stroke as normal where put down as covid deaths.

Hermina Fenerty
I suspected that all along. I wonder how many were cremated? 🤔. Would take a bet a large number. And still there will be people that don’t see anything wrong in this.

Ronnie O’Regan
I wonder are they carrying out autopsies on all the unexpected deaths occurring at present. RIP Cork today had 11 deaths listed, 6 of them unexpectedly.

Karen Feeney
How fitting for a “pandemic” built on guesstimates and lies not data. How else would they have achieved their target numbers to invoke fear in the masses and justify their measures? Can’t/won’t do autopsies if they are going to prove the bs, how else would you get people to line up…..

O Connell Harrington Maire
Are the bodies of covid 19 patients contagious? Really? Why are the post mortoms just focused on two sites ? Is it necessary or just another part of the script to have full control ?

03 Feb 23
where to get gabapentin
by Kimavast

03 Feb 23
I am really thankful to the holder of this website who has shared this great article at at this time.
by basics

03 Feb 23
It is a monetary move that lottery winninbs professional Victor Matheson, Ph.D., an economics and accounting professor at College of the Holy Cross, strongly advises against. My web-site: Dave
by Dave