The Rabbinical Court is part of the Israeli legal system and determines laws that reflect the teachings of the Torah. A ruling by the Rabbinical courts is considered God’s law and is strictly followed by the Jewish community. The importance of this decision cannot be understated on its ultimate effect on Jewish children and young adults throughout the world. 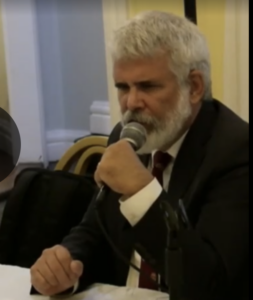 After hours of testimony on October 26th, 2021 by medical experts, lawyers, and scientists, the Rabbinical court made their decree which sent shock waves throughout the world. The decision stated:

“It is absolutely forbidden to administer or even to promote this injection to children, adolescents, young men or women; even if it means that they will not be permitted by the government to attend yeshiva or seminary or to study abroad, etc. It is an explicit obligation to protest against this mandate, and anyone who can prevent the injection from being forced upon our youth must do so, forthrightly and emphatically.”

Further the court forbid pregnant woman and all healthy adults who are of child-bearing age,

“Much harm appears to be caused to pregnant women as a result of the injection (possibly due to the antibodies that the body develops against the protein called Syncytin‐1, or from the SM102, or from the micro blood clots caused by the injection. The common denominator here is that it is harmful for a pregnant woman, and that it may be considered a violation of the prohibition of sterilization or preventing fertility). As such, it is forbidden for them to take this injection. Included in this are all healthy adults who are of child‐bearing age – they too should stay away from the said injection.”

The decision also addressed older adults and that further clarification needs to be made. But they specifically determined that “it is best to err on the side of caution”.

“Therefore – it is best to err on the side of caution and abstain from taking the injection, rather than endangering one’s lifeby performing an action that can engender immediate and direct harm. Especially since there are other medical treatments that work, as mentioned, and that are not harmful.”

The other major part of this decision is in regard to promoting or influencing anyone from straying from this decree. Specifically it states:

“assisting or enabling a person to violate a transgression – includes verbal encouragement, offering monetary incentives or other bribes, verbal pressure or actual threats, to coerce employees, etc., to receive the mRNA.” 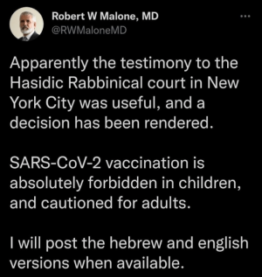 Dr. Robert Malone, who is widely credited for inventing the mRNA vaccines while he was at the Salk Institute in 1988, posted the following statement after the decision had been made public:

“Apparently the testimony to the Hasidic Rabbinical court in New York City was useful, and a decision has been rendered.

SARS-CoV-2 vaccination is absolutely forbidden in children, and cautioned for adults.”

“I will post the Hebrew and English versions when available”

Attorney Thomas Renz, who is the lead attorney for America’s Frontline doctors who is suing the CDC, President Joe Biden, Anthony Fauci and others, made this statement:

“On Tuesday of last week, I was given the unique honor to testify at a Rabbinical Court in New York City with a number of the top experts in the world regarding the COVID jabs. It was my pleasure to provide input to God’s chosen people on such an important issue, and I hope it will save lives.” 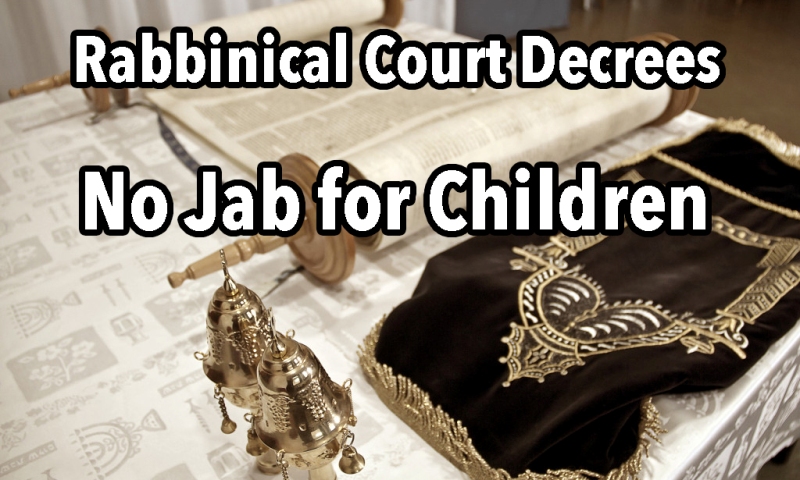