As a Pfizer exec admits its vaccine was never tested on preventing transmissions, we ask, what was “get vaccinated to save other people” all about – let alone vaccine passports? 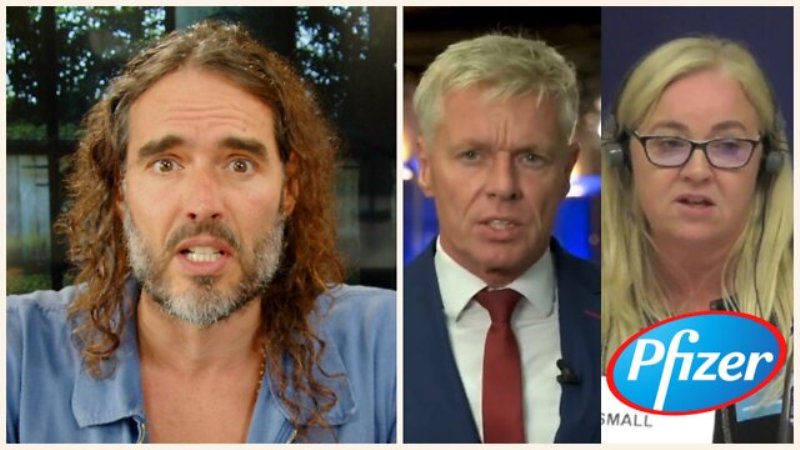 Friidom2
phizer should be shut down completely and all involved with the vaccines for covid should be put in prison.

BTownBuffs
IT WAS A SCAM AND ALL THE SHEEP FELL FOR IT!

realpearls
And still some people are lining up for their boosters, clinging to their blind obedience to the narrative. I live in NYC and people here are permanently insane. No logic whatsoever.

RomeoFoxtrot1967
We knew this from the get go. Not getting the “vaccine” was simply common sense because the risk just wasn’t worth it.

babyimasimplekindofman
I’ve been trying to tell you for quite some time Russell. The writing has been on the wall for a LONG time. This is un agenda 21 being played out in real time, with all the usual conspirators like the wef, imf, who, deep state, central banks, and so on.
You have a voice, please use it to pinpoint the real actors behind this global hostile takeover.

hcwh3r0
When I heard James Corbett say in 2020 that this is not about the virus and more about the vaccine, that is when all the pieces came together regarding depopulation and consolidation of global wealth into a few hands.

Freeadixxx
It was never about covid, it was all about changing your DNA. Don’t be naive and wait for someone to come out and say “Hi there, I’m the Antichrist and I need you to take this shot and we’ll call it the mark of the beast”. God made you smarter than that.

esteveo
so does that mean with the trends of dollars they’ve made that we can disband their company freeze their accounts and everybody around the world get a portion of Pfizer’s money.

RavenE
So if Pfizer lied and mislead the public, thier contract that absolves them of any liability should be nul and void on the grounds of misrepresentation. The contract was signed in good faith that the vaccine would stop transmission. Thier lies and misinformation should make it possible to contest the contract.

HelloKitty212
Those questions should’ve been asked BEFORE the vaccine mandates. After all, if the idea was “to stop the spread,” there ought to be a modicum of evidence that these jabs would, in fact, do that. Fauci destroyed credibility of govt scientists and got even wealthier in the process. And no, as a taxpayer, I don’t want to fund these things when the taxpayer doesn’t get the royalties or license fees for the underlying intellectual property.

amie28
100% agree that Pfizer should never have a contract again! Government or otherwise.

8427
and the Democratic party is complicit in genocide along with the rest of the world leaders I think that will be proven Beyond A Reasonable Doubt the very near future.

chickengate
Mainstream isn’t reporting this anywhere. How the hell are the sleepers supposed to wake up.

PrevPreviousCandace Owens: We Live in a Society Where the Last Thing You Want to Be is a Straight White Male
NextHow Cancer Deaths From the COVID Jabs Are Being Hidden?Next

08 Dec 22
Appreciating the dedication you put into your site and detailed information you present. It's great to come across a blog every once in a while that isn't the same unwanted rehashed information. Fantastic read! I've bookmarked your site and I'm adding your RSS feeds to my Google account.
by online medicine shopping

08 Dec 22
price of tamoxifen
by Charlesjoimb

08 Dec 22
That is really interesting, You are an excessively professional blogger. I've joined your feed and sit up for seeking more of your wonderful post. Also, I have shared your website in my social networks
by https://myeclass.academy/blog/index.php?entryid=246476

08 Dec 22
Hello there! This blog post couldnít be written much better! Looking through this article reminds me of my previous roommate! He always kept preaching about this. I most certainly will send this article to him. Pretty sure he will have a great read. Thank you for sharing!
by Search Engine Optimization