By Will Jones | The Daily Sceptic

The BBC has published another of its questionable ‘reality checks‘, this one by the aptly-titled “disinformation reporter” Rachel Schraer. Her target is doctor Steve James, who directly challenged Health Secretary Sajid Javid on the science behind the impending vaccination mandate when Mr. Javid visited the hospital where he works last week. Schraer, whose medical and scientific credentials are unclear, has taken it upon herself to assess Dr. James’s claims in a piece entitled “Fact-checking the doctor who challenged the Health Secretary“, saying the claims are “not exactly what the evidence shows”. However, the evidence she picks for this ‘fact check’ is very selective, and she overlooks several studies that do indeed back up what the brave doctor was saying.

Dr. James told Mr. Javid: “The vaccines are reducing transmission only for about eight weeks with Delta. For Omicron, it’s probably less.”

While vaccines remain very good at protecting against becoming severely ill with Covid, the protection they give against catching it and passing it on does wane more quickly.

Dr. James was referring to a study that found a vaccinated person with Covid was just 2% less likely than an unvaccinated person to pass it on, 12 weeks after a second Oxford-AstraZeneca jab – he acknowledges his reference to “eight weeks” was an error.

But the same study found the Pfizer-BioNTech vaccine, which NHS staff are likely to have had, endured better. Vaccinated people had a 25% lower risk of infecting others than unvaccinated people after 12 weeks.

Well, 25% is not very much, and this is not the only study which looks at this, with others finding even smaller effect. A study in the Lancet found no difference in household secondary attack rate depending on whether the index case was vaccinated, and correspondingly no difference in viral load. A study by the U.S. CDC also found no difference in infectiousness and concluded: “Clinicians and public health practitioners should consider vaccinated persons who become infected with SARS-CoV-2 to be no less infectious than unvaccinated persons.” UKHSA and others have also found viral load no lower in the vaccinated. These studies are all pre-Omicron, which is likely to be even more able to evade vaccines.

And this research alone doesn’t tell the whole story – the vaccines also reduce people’s risk to others by stopping them catching the virus in the first place.

Vaccinated people also seem to clear the virus faster and have less of it in their system – reducing their chances of passing it on.

These studies all looked at the Delta variant, first identified in India.

Two vaccine doses appear to be less effective against catching and passing on Omicron infections – although, they are still good at preventing severe illness – but much of the benefit is restored with a third booster jab.

While some studies, particular older ones, have found high effectiveness of the Pfizer vaccine against infection, others have found it drops much lower, with one study from Sweden finding “no effectiveness could be detected” after seven months. Against Omicron many studies have found negligible effectiveness after just three months. Furthermore, according to UKHSA data, infection rates in the ‘fully vaccinated’ have been higher than in the unvaccinated for a number of months – implying negligible or negative unadjusted vaccine effectiveness pre-Omicron – with boosters improving the situation but Omicron reversing the trend.

‘Disinformation’ Schraer then moves on to natural immunity.

The second part of Dr. James’s argument was that he had probably had Covid, providing him with some protection without a vaccine.

“I’ve got antibodies,” he said.

“I’ve been working on the Covid [intensive-care unit] since the beginning.”

So-called natural immunity – having immune cells such as antibodies and T-cells in your system that recognise and fight off the virus from an infection rather than a vaccine – can offer effective protection, although it comes with the risk of becoming very ill or developing “long Covid”.

This comment is irrelevant as Dr. James has already recovered from Covid and was not suggesting that others should contract it instead of being vaccinated (though some may conclude their risks from the vaccine outweigh those from the virus, particularly as the vaccine does not prevent contracting the virus).

But what the doctor didn’t mention is that, as with his point about vaccines, this protection also wanes and may be ineffective against infection with a different variant.

An Imperial College London study suggests the protection from having had Covid against infection by the Omicron variant, first identified in South Africa, “may be as low as 19%”.

The Imperial study was published on December 17th using early data and, contrary to most other studies, found “no evidence of Omicron having lower severity than Delta”. This suggests it should not be taken as the final word on Omicron and natural immunity. A more recent study puts the protection provided by natural immunity against Omicron infection at 56%, around the same level as is reported for the boosters (and more resilient).

The best protection against Covid comes from having an infection and being vaccinated too, several pieces of research have found.

What Schraer doesn’t mention, however, is that the gain from being vaccinated on top of infection is marginal, and needs to be considered in light of the risks of repeated vaccine doses.

To her credit, Schraer then quotes an academic who broadly supports Dr. James’s opposition to vaccine mandates.

Dominic Wilkinson, a Professor of Medical Ethics, at the University of Oxford, says doctors have a clear ethical duty to be vaccinated but sacking someone who is not but can show they have had a recent infection that may provide similar protection may be unjustifiable.

If the vaccines completely blocked transmission, it would be a much simpler question, he says.

But since they are less effective against new variants, it is “no longer as clear”.

Unfortunately, ‘Disinformation’ Schraer then lets herself down and makes mischief for Dr. James by smearing him by association with the “reaction online”.

Another NHS hospital doctor, Dr Meenal Viz, who spends her spare time online correcting misinformation, told BBC News she feared the clip of Dr. James would be seized on by those who wanted to suggest the science for the vaccine in general was not strong enough – despite the huge weight of evidence from hundreds of independent institutions and millions of people that it prevented disease and death.

This fits into a pattern she regularly sees online, where short clips, single statistics or lines from a scientific study taken out of context can “completely blow up” and cause more confusion than straightforward falsehoods.

“On the internet, when things go viral, people tend to cherry-pick what they want,” Dr Viz said, potentially leaving people with the impression an intensive care doctor was doubting the science of the vaccine, rather than the much narrower and more complicated point Dr. James says he was making.

And her fears were not misplaced.

Dr James’s comments were eagerly seized on by those against vaccination, including some promoting false theories such as the virus is a hoax.

BBC News also found it referenced in more extreme encrypted chat groups, including one used to organise removals of sick patients from hospital against doctors’ advice and coordinate the serving of bogus legal writs accusing doctors and teachers of crimes against humanity.

But Dr. James stands by his comments: “If people wish to polarise, they will do that,” he says.

Leaving aside the malicious smearing-by-association with a random WhatsApp group the BBC found somewhere, it has to be asked, who’s more of a threat to the public right now, an obscure group of ineffectual online activists, or the people in Government and their flunkies in the media who wish to fire thousands of hard-working medical staff, at a time of national shortage, based on a false belief that vaccines prevent the spread of COVID-19? 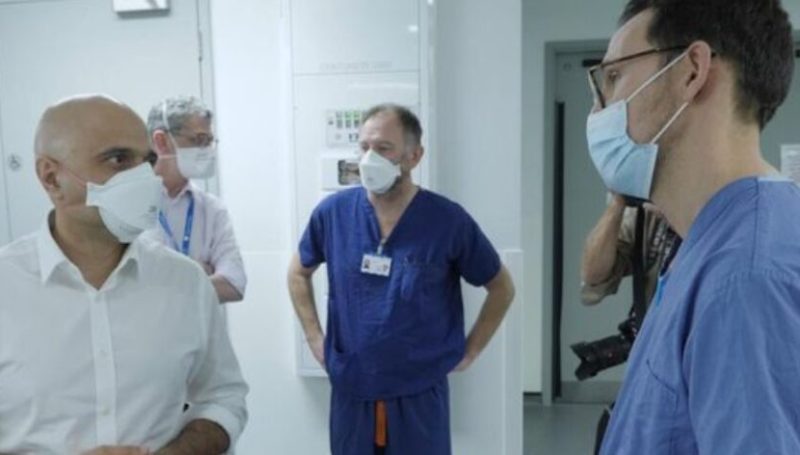 26 Jan 23
I love reading through your websites. Thanks a lot! www
by www