By The COVID World

In an exclusive, another professional sportsman has been forced to end their career due to the COVID-19 vaccine.

BYU basketball player Richard Harward has announced that he will not be playing for the rest of the season after collapsing during an exhibition game against Colorado Christian on November 4th, less than two weeks after he was coerced into taking the Pfizer jab by team management.

Richard said about the ordeal:

“The condition affecting my heart has developed further complications. For my health and safety, it has been determined I will be out the remainder of the season. I have been overwhelmed with the outpouring of kindness and support.”

According to his mother, Alice, Richard originally did not want the vaccine but was “pressured, coerced and shamed” by team management who eventually threatened to stop him from playing for “not going along” and “keeping everyone safe”. However, as is obvious by now, the vaccines are not safe and Richard has paid a very heavy price from which he may never recover.

Richard, who was previously in peak physical condition, became extremely ill within a few days of getting the jab, passing out and suffering from “horrible pressure and pain in his chest”. He developed severe heart inflammation as well as blood clots.

As is usual in these cases, all the doctors that he saw except one denied that it could have anything to do with the jab and said that such injuries “are just inevitable at some point of life for some people.”

Doctors have also apparently recommended that he not take blood thinners such as aspirin to fight the clots.

The rest of his BYU teammates are understandably shocked at his injuries and are currently discussing filing a lawsuit against the team, although if past experience is any guide, the only tactic that will have any effect is a team strike.

The news of Harward’s vaccine injury comes just months after NBA Player Brandon Goodwin announced that his season was ended early last year due to blood clots as a result of the COVID-19 vaccine. The 26-year-old hasn’t signed with an NBA team since and it is speculated that his career in the league is over. 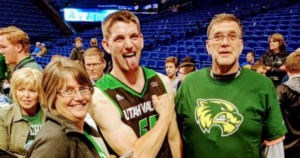 PrevPreviousMessage From Rabbanit Morasha of Jerusalem, Dictated in English and Hebrew to Brigitte A
NextRumble Shows Their True Colors Once AgainNext

04 Feb 23
Hey there! I know this is somewhat off topic but I was wondering if you knew where I could find a captcha plugin for my comment form? I'm using the same blog platform as yours and I'm having trouble finding one? Thanks a lot!
by Hiram

04 Feb 23
DraftKings New Yoork is licensed to operate in about 20 states and one particular of the leader for sports betting New York. Also visit my web siute ... 안전사이트쿠폰
by 안전사이트쿠폰

04 Feb 23
I used to be able to find good information from your blog posts.
by titleist golf balls wholesale

04 Feb 23
Wonderful blog! Do you have any hints for aspiring writers? I'm hoping to start my own site soon but I'm a little lost on everything. Would you suggest starting with a free platform like Wordpress or go for a paid option? There are so many options out there that I'm totally confused .. Any recommendations? Appreciate it!
by crypto casino script download win5x

04 Feb 23
Wow! After all I got a web site from where I be able to in fact take helpful information concerning my study and knowledge.
by Rene