VACCINES ARE “REALLY GREAT” AT LOWERING THE POPULATION

After sharing his great concerns about overpopulation, Bill Gates said in his 2010 Ted Talk: “If we do a really great job on new vaccines, health care, reproductive health services, we could lower that by perhaps ten or fifteen percent.”

“Vaccines” are “something I love,” he said in another talk on climate change and overpopulation. In another interview, he cited vaccines again as a way to lower population, which I will quote in a few paragraphs. 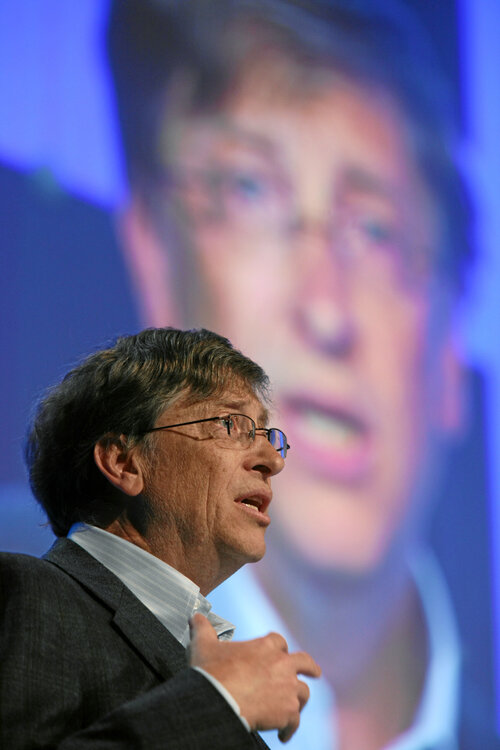 Years earlier, in a 2003 interview with Bill Moyers, Bill Gates said that “the one issue that really grabbed me as urgent were issues related to population.” Then he clarified himself: “. . . reproductive health.”

So Gates has been trying for years to speak correctly about his curious agenda, but his PR staff keeps having to clean up his gaffes.

Most people have a working knowledge of the story of Bill Gates’s rise from a teenager in the Seattle suburbs to college dropout, to computer whiz kid who forged an unlikely software partnership with IBM to become the richest man in the world. He is the science type. Smart. Rational. He’s not a church-goer. Bill said church represents an inefficient use of his time.

According to biographer Ron Chernow, Gates has a staff of thirty people who work on his public image. And that’s good, because Gates was in an awkward position as a rich white male speaking publicly about his ambition to use his money to tell women in foreign countries what to do with their bodies. Even so, he forged ahead. “You could tell three things about Bill Gates pretty quickly,” said his Microsoft high school partner turned billionaire, Paul Allen. “He was really smart, he was really competitive. . . . and he was really, really persistent.” 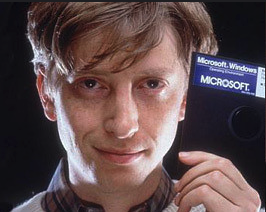 Allen and Gates first met at Lakewood High School in Seattle, the most prestigious in the state of Washington and ranked sixth in the nation. The tuition cost three times more than Harvard’s. Bill’s PR handlers have done a pretty good job of positioning their boss as a “just above middle-class suburbanite”

who hit it big. The news never really got out that his father, who goes by Bill Gates, Sr., was a major corporate lawyer on the national scene and that his mother was even more prominent. Bill’s great-grandfather on his mother’s side, J. W. Maxwell, founded Seattle’s National City Bank in 1906. He was “the director Federal Reserve Bank of San Francisco Seattle Branch.” His fortune left little Bill a trust fund worth millions in today’s dollars. His mother was also on the board of the United Way with the chief executive officer of IBM, so a relationship in high places helped that particular computer geek, out of many, to somehow land the nation’s largest software deal. Neither Bill nor Paul Allen wrote the code.

The affable Bill Gates, persistent as always, ignored the differences between him and his darker-skinned, poor female constituency and promised to give away ninety percent of his fortune, focusing on health care, contraception, and prevention. As quoted above, “Vaccines” are “something I love,” he said during a talk on climate change and overpopulation. He was mixing all those words a little too closely together as he talked about the “magic of vaccines,” and he kept messing up in his public addresses. At a 2010 Ted Talk he said the following: 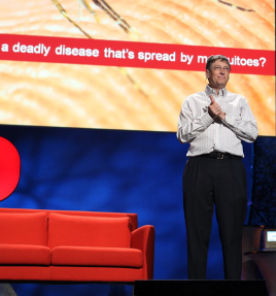 “The world today has 6.8 billion people. That’s heading up to about nine billion. Now, if we do a really great job on new vaccines, health care, reproductive health services, we could lower that by perhaps ten or fifteen percent.”

First of all, any kind of talk discussing the lowering of population is a little eerie, and sounds like the eugenics of a century ago. This particular quote by Gates sounds a bit like an attempt to use vaccines to lower the population. Surely, there must be an explanation. Then, in a separate interview, he created the same confusion a second time. When asked by CNN’s Sanjay Gupta about his Decade of Vaccines initiative, he said: “The benefits [of vaccines] are there in terms of reducing sickness, reducing population growth.”

His gaffes were enough to cause suspicion in many places. Dr. Gary Null writes of the “public image of the very likable mild-mannered Bill Gates” and his “ambition to improve the health of the developing world.” But his several on-the-record comments suggest “the possibility of other ulterior motives that are contrary to saving lives.”

Surely there is an explanation here. It’s not like Bill Gates is directly connected to Planned Parenthood founder Margaret Sanger, an infamous eugenicist, who spoke publicly about eliminating “human waste,” who published articles by Nazis and white supremacists, and was a rabid fan of reducing population. Surely, Gates’s thirty handlers were scratching their heads regarding the repeated gaffes. Perhaps they advised him to find someone else for the face of the franchise. So, what does the very smart, very competitive, very persistent Bill Gates do? Enter Melinda Gates. 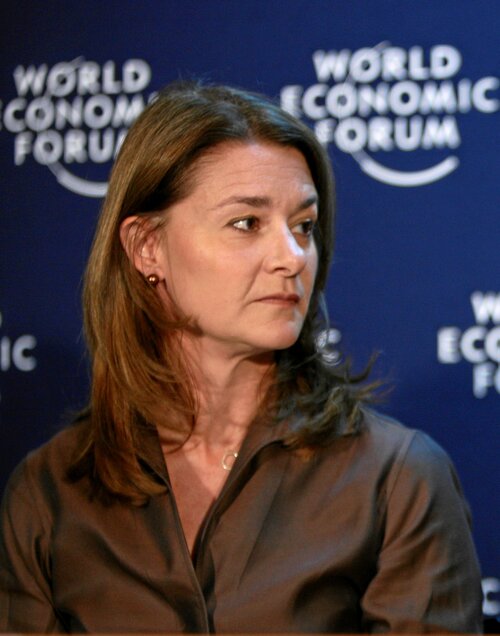 Married to Bill in 1994, Melinda French Gates brings a savvy that Bill can’t quite muster, and she caters to the right demographic. She is younger. She is a woman. First in her high school class and the college valedictorian, she runs marathons and climbs tall mountains. She and Bill get to have three kids—more than the replacement rate—and she was raised in a home of four children who enjoyed having a stay-at-home mother. Their house has twenty-four bathrooms and is valued at $147.5 million, not including a notebook known to reside somewhere inside (when not loaned to museums) belonging to Leonardo da Vinci worth $50 million. But Melinda, raised in an upper-class neighborhood—but lower than her current station—is certainly closer to the target constituency of poor, African females than Bill.

She is also more perceptive than her husband. “Bill readily admits that Melinda understands people better than he does,” according to a friendly biopic, likely written by the PR staff. Warren Buffett agrees. “Bill is an awkward guy. He’s lopsided, but a little less lopsided since he’s with Melinda.”

Melinda was quick to explain Bill’s strange comments about vaccines as part of a plan to reduce population. “If you allow a child to live, there’s a whole group of skeptics who say ‘Well, isn’t the mother going to keep having seven babies or five babies and we’re going to overpopulate the planet? That worried Bill and me, too, quite frankly,” she said. “But, thank God the converse is true, that, as a woman and the husband see their children will live into adulthood, the woman naturally brings down her birthrate.” Their argument: vaccines improve health. Healthier families decide it’s okay to have less children. Thus, population is reduced.

In another place she spoke of Bill Gates, Sr.: “Bill’s dad, thank goodness, has always been there. This family presence is really important in the foundation.”

As explained earlier, the public story of Bill Gates is as follows: a middle-class computer geek becomes an overnight billionaire, and one day he wakes up out of nowhere in his forties and decides to take on overpopulation. But his handlers have kept you from the rest of the story. Bill committed another gaffe in 2006 when he gave an interview to Bill Moyers. He said the following:

“When I was growing up, my parents were always involved in various volunteer things. My dad was head of Planned Parenthood. And it was very controversial to be involved with that. And so it’s fascinating. At the dinner table, my parents are very good at sharing the things that they were doing. And almost treating us like adults, talking about that.”

No, Bill Gates didn’t just decide one day later in life to take on overpopulation. He was raised from childhood to believe overpopulation was the key problem for humanity. He was discipled by a disciple of Margaret Sanger.

Overpopulation. “It’s an interest he’s had since he was a kid,” Bill Gates, Sr., told Salon.com. 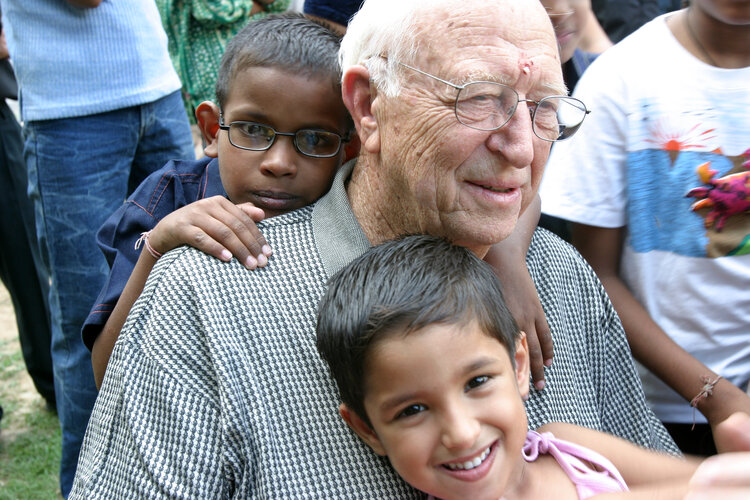 Bill Gates, Sr. This is the only photo that can be legally reused of Bill Gates, Sr, although many exist online, as well as many reusable photos of Bill, Jr.

What did Bill Jr. mean by “head of Planned Parenthood”? Perhaps his father was chairman of the board for a time. I could find no records to document that fact.

Bill Gates, Sr., as much as any person in the world, had the power and position to advance the legacy of Margaret Sanger, the woman who openly called for using birth control and sterilization to eliminate “human waste” and “create a race of thoroughbreds.” In her Birth Control Review she promoted Nazi eugenics and white supremacy. As one contributor to Sanger’s Birth Control Review wrote: “It is the lower elements of the population, the negroid aboriginal tribes and the pariahs or outcasts, who are gaining the fastest.” 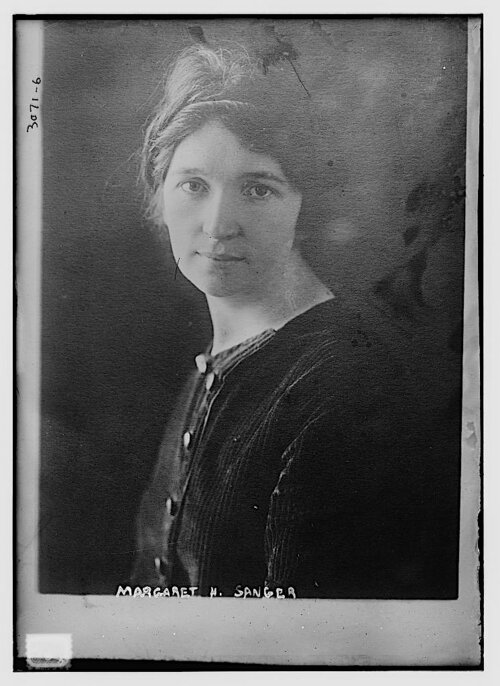 Sanger’s same magazine published a favorable review by her lover, Havelock Ellis, of the book The Rising Tide of Color Against White World Supremacy by Lathrop Stoddard. Ellis notes that Stoddard chooses to “concern himself mainly with . . . the maintenance of White supremacy.” Ellis agrees that “by prejudice of color, we must mostly be on his side in this matter.” Ellis also shares his concern about African Americans: “the migrations of lower types, even within the white world, such as those which have worked havoc in the United States, must be rigorously curtailed.” Ellis also wrote the preface to Sanger’s 1920 book, Woman and the New Race.

In a later Birth Control Review article, Sanger calls for giving “certain dysgenic groups in our population their choice of segregation or sterilization.” She also published an article by close friend and advisor Ernst Rudin, who was then serving as Hitler’s director of genetic sterilization for the Nazis. It was entitled “Eugenic Sterilization: An Urgent Need.”  Sanger famously said: “The most merciful thing that the large family does to one of its infant members is to kill it.”

How did Bill Gates’s father view Margaret Sanger? According to an official Planned Parenthood history: “Our founder, Margaret Sanger, was a woman of heroic accomplishments, and like all heroes, she was also complex and imperfect.”

“My dad was a large presence, both physically and his wisdom,” said Bill, noting that Bill Sr. was “good at stepping back and seeing the broad picture.” In a tribute video, he said his father was a leader in everything he did. He closed with this comment to Dad: “You really got the foundation going and put it in a direction that’s made it incredibly successful.”