Ursula von der Leyen, President of the European Commission, told the press on Wednesday that she believes it to be both “understandable and appropriate” for EU member nations to consider mandatory vaccinations. This after it became clear that a full third of Europeans have yet to undergo the jab, according to the BBC.

At the Brussels press conference, she addressed the issue of mandatory vaccinations, saying the matter “…needs discussion. This needs a common approach, but it is a discussion that I think has to be led.”
This in light of the Omicron variant of Covid 19, which has been now detected in 12 different member nations of the EU.

This led some to offer a comparison between forced vaccinations and the provisions in the Nuremberg Code. In November, Austria announced that mandatory Covid vaccinations would be on the horizon, with the government “preparing the legal groundwork for a general vaccine mandate” to come in February 2022, according to The Guardian.

In Austria, those over 12 who are not vaccinated are currently almost completely locked down, only allowed outside for absolutely essential tasks like food or medical appointments.

It was after this that von der Leyen made her remarks, leading some to say that she is in favor of scrapping provisions in the Nuremberg Code. According to that Code, drafted after the atrocities committed by Nazis during the second World War, people must be allowed to give consent for experimental medical treatment.

Prominent critics such as Dr. Jordan Peterson considered forced vaccination under severe penalty to be analogous to scrapping the Nuremberg Code on human medical experimentation.

The reasoning for this is that many believe that the vaccine, barely a year old, has not been proven entirely effective against the illness, or necessary to be applied to children, who CDC data shows are at substantially less risk of Covid than their adult counterparts, specifically the elderly and those with accompanying co-morbid conditions. 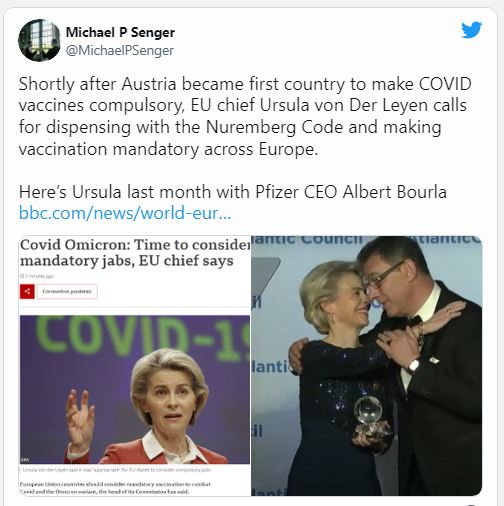 While the vaccine is barely a year old, the virus is only twice as old as that, as the first known cases were reported in China as recently as December 2019, with some saying that there could have been cases as far back as November 2019. The origins of the virus, while still under investigation and speculation, are not yet known.

“Hey, it’s just the Nuremberg code. Only what we learned from the Nazi atrocities, not least those that were medical,” Peterson wrote. 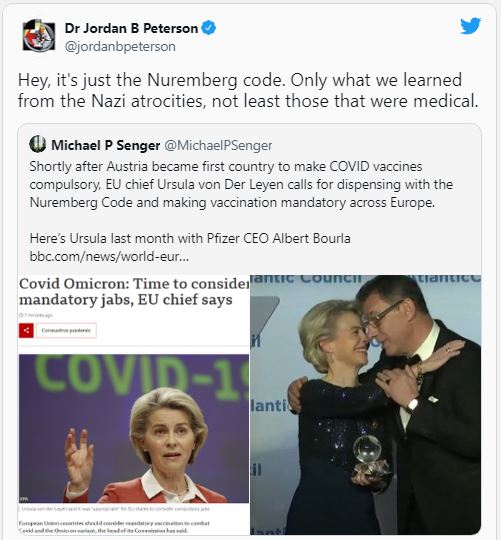 There were 10 conditions under which “physicians must conform when carrying out experiments on human subjects.” These include that the human subject must give “voluntary consent.” The Code states that this consent must be without undue “force, fraud, deceit, duress, overreaching or other ulterior form of constraint or coercion.”

Additionally, there must not be a reason to “believe that death or disabling injury will occur,” unless physicians are also serving as subjects. “The degree of risk to be taken should never exceed that determined by the humanitarian importance of the problem to be solved by the experiment.”

The final tenet of the Nuremberg Code on human medical experimentation is that “During the course of the experiment the scientist in charge must be prepared to terminate the experiment at any stage, if he has probable cause to believe, in the exercise of good faith, superior skill and careful judgement required of him, that a continuation of the experiment is likely to result in injury, disability, or death to the experimental subject.”

The World Health Organization, however, has strongly encouraged countries not to enact travel bans because of Omicron, and said that early data points to the fact that most Omicron cases are not severe. This was corroborated by a health official in South Africa, where the latest variant was discovered. Most of the world’s governments are not paying attention to the WHO’s guidelines on this occasion, however.

The Nuremberg Code was enacted in 1947, immediately after the Second World War to prevent many of the egregious human rights abuses enacted by the Nazis and the Imperial Japanese during the war.

Especially at issue was the medical experimentation performed on subjects without their consent. These procedures, often performed under the command of people such as Dr. Josef Mengele or Hideki Tojo, were akin to the worst kinds of torture. Since then, full, proactive ongoing consent has been required by human subjects in medical trials and experimentation.

The idea that vaccine mandates, or forced vaccination, could be a violation of the Nuremberg Codes was disputed by Lead Stories, which fact checked an earlier version of this story.

Lead Stories noted, correctly, that though the earlier version of the story claimed that von der Leyen called for the scrapping of the Nuremberg Codes, she did not say that outright. Instead, von der Leyen made an argument for nonconsensual forced vaccinations under penalty of drastic restrictions for citizens’ freedom of movement.

However, Lead Stories did acknowledge that critics of forced vaccination under these kinds of severe penalties believe fully that the Covid vaccines currently on the market are, in many ways, experimental. The increasing pressure with which governments are pushing vaccine mandates and requirements has made many wary, not only because of questions of efficacy, but because the illness they seek to cure or mitigate is only a year older than the vaccines themselves.

There are also questions of government overreach as regards the legality of forcing medical procedures onto citizens without their consent, or restricting their movements until they comply.

Lead Stories wrote that von der Leyen did not mention the Nuremberg Codes, but that even if she had, the Code, drafted after more than 6 million people were killed during the Holocaust in a massive genocide, where many were subjected to medical experimentation without their consent, “has never been adopted as law by any nation,” meaning that violating these terms is not a breach of law.

They write that there was “no evidence” of von der Leyen speaking about the Nuremberg Code. However, when a leader begins to talk about enforcing medical procedures on a population without their consent, it is difficult not to see the comparison. 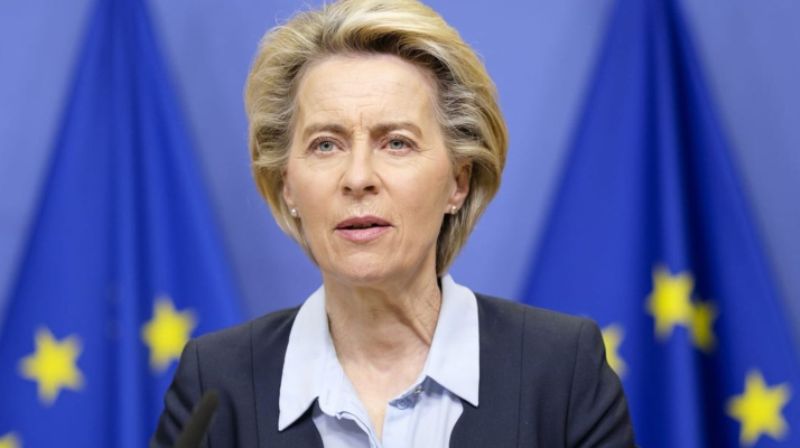 04 Feb 23
I'm not sure why but this site is loading very slow for me. Is anyone else having this problem or is it a issue on my end? I'll check back later on and see if the problem still exists.
by TAILORING