The official line is that the weekly reports of people collapsing in the audience of football matches are no different to normal, only in the past the matches would not have been stopped. There may be an element of truth in that, but the rise in ambulance calls for cardiac and respiratory arrests suggests that people are right in their suspicions and that there are good reasons for genuine concern about the health of the nation’s hearts. 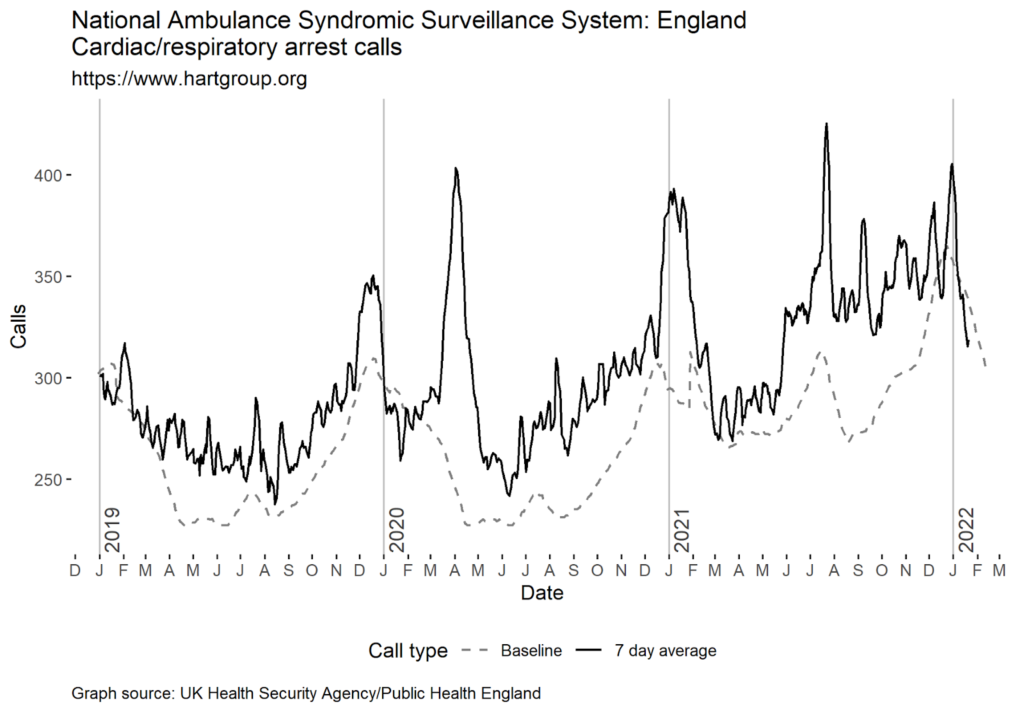 The UK reports detailed and timely public health data, something for which we should be very proud. A weekly report from the 10 English ambulance trusts shows numbers of calls for cardiac or respiratory arrests. The two are grouped together as it is not always clear whether a cardiac arrest was precipitated by a respiratory arrest. The data shows two anomalies:

The latter is important as deciding whether there is a problem is critically dependent on knowing what “normal” levels should be. There is no text in the reports detailing why the baseline has shifted so dramatically. The expected number of daily arrest calls rose suddenly in March by about 50 per day –  around 30% higher than before.

Other publications have shown such shifts when additional trusts are added to the dataset but all the ambulance trusts have been reporting data throughout this period. What is more, the baseline for other conditions, e.g. overdoses and falls or injuries, have remained constant between 2019 and 2021. The only other baseline that has shifted significantly is that for chest pain which has risen from a steady 1,600 per day to 2,000. The number of calls for chest pain remains around the previous baseline of 1,600.

Another explanation could be that the shift in baseline is caused by a change in the years included in the calculation. The baseline is usually made up of the previous 5 years so in 2019 it would have included 2014-2018 and in 2021 it included 2016-2020. If 2015 had a particularly low level of arrest calls then removing it from the baseline would cause a rise. However, this would be expected to occur from 1st January not March.

The reason for the rise in baseline therefore remains unexplained.

The original data reports the daily numbers as well as a 7 day rolling average. Prior to 2021 the peak daily calls were around 400 arrest calls in a day. However, this winter the peak surged beyond an unprecedented 500 in a single day.

Given the uncertainty about the reason for the rise in baseline, there must also be some uncertainty around the 27,800 figure. However, it is fair to say there were 20,000 more arrest calls in 2021 than in 2019, a 20% increase. This compares to an increase of 6,000 in 2020 compared to 2019, a 6% increase. Whereas the increase in 2020 was clearly associated with the covid waves, the increase from May 2021 has been high regardless of covid prevalence.

When a football match is suspended, the reality of a sudden illness in a sick parent or grandparent hits home. When a number is presented on a graph, a distance is created from the hurt that is caused by that event. Those football matches are just a sample of the population, and for every father taken away by ambulance while his daughter goes home with a friend there were around 70 others not in a football stadium who were similarly affected that day. Taken together with the rise in excess deaths in the young and the rise in deaths at home, there is a hidden non-covid public health crisis here that is causing far more harm than this year’s dominant respiratory virus. 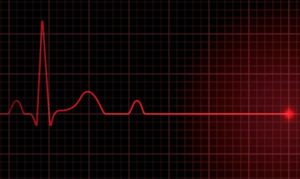 PrevPreviousThere’s Much Talk About Cutting Off Russia From Swift, but Who Stands To Lose More?
NextUS Embassy Just Removed All Their Ukraine Bioweapon Lab Documents From the WebsiteNext