Bradley Tusk says that the regulatory issues in the U.S. will not only be replicated but amplified as we see the internet move towards the Metaverse.

Tusk Ventures CEO and founder Bradley Tusk says that the failure to regulate cryptocurrency and social media effectively in the United States is a “really good lesson for how we should handle the Metaverse.”

In a Feb. 1 interview on CNBC’s “Closing Bell,” Tusk urged U.S. policymakers to “get ahead” of the Metaverse and implement regulations sooner rather than later.

“Typically speaking, our policy has been that we wait for technology to be introduced to gain market fit and traction [before introducing regulation].” However, “It’s very hard to do that retrospectively,” he said.

We know the Metaverse is coming — it’s already here in some ways. We know it’s got all the problems of the internet, probably times five or ten. So why don’t we think about it now, and get ahead of it?

He echoed this sentiment in a Mirror blog post uploaded the same day, writing: “The problems we have regulating technology companies now will be reproduced and amplified in the Metaverse. You think policing state-sponsored disinformation is hard on Facebook and Twitter? Wait until you try it in 3-D.”

He also stated that while policymakers are unable to develop specific regulations for the Metaverse until they have a better sense of what’s coming, they should start by looking at cryptocurrency and social media. 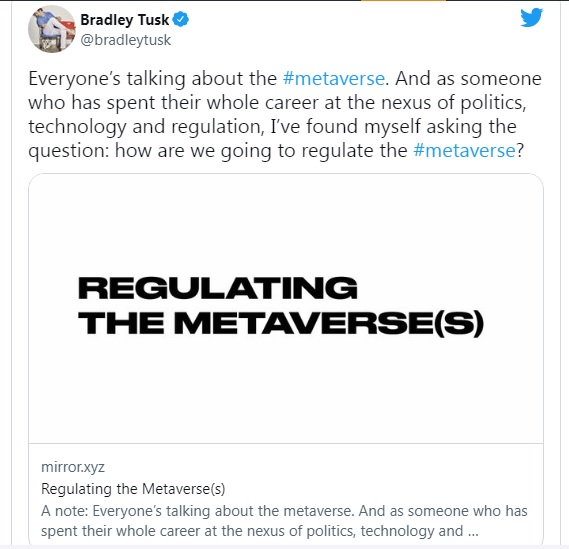 We can avoid making the same mistakes we did with Facebook, Instagram, Twitter, and social media generally if we can develop an intellectual framework for regulating the Metaverse now.”

Crypto regulation is becoming an increasingly hot topic in the hallways of the U.S. Securities and Exchanges Commission (SEC). According to a Jan. 19 report by Cornerstone Research, the SEC has launched a total of 97 actions against crypto organizations since 2013, 20 of which happened in 2021 alone.

Despite the continued calls from some congresspeople and industry players for a more coherent and consistent regulatory framework when dealing with cryptocurrency, Tusk told CNBC that policymakers’ inaction had left citizens without basic protections.

We don’t have basic rights about who owns what data, how can we transfer it, how can we take it down. Those are all basic things that I think at this point we have a right to expect our government to handle. And when the Metaverse comes, it’s just going to be that much more extreme.

Tusk was an early investor in Uber, Lemonade, and Coinbase. During 2009, he served as the campaign manager for media oligarch Michael Bloomberg in his bid to be re-elected as the Mayor of New York City. He also has acted as the Deputy Governor of Illinois, an early political advisor to Uber, and the Communications Director for U.S. Senator Check Schumer. 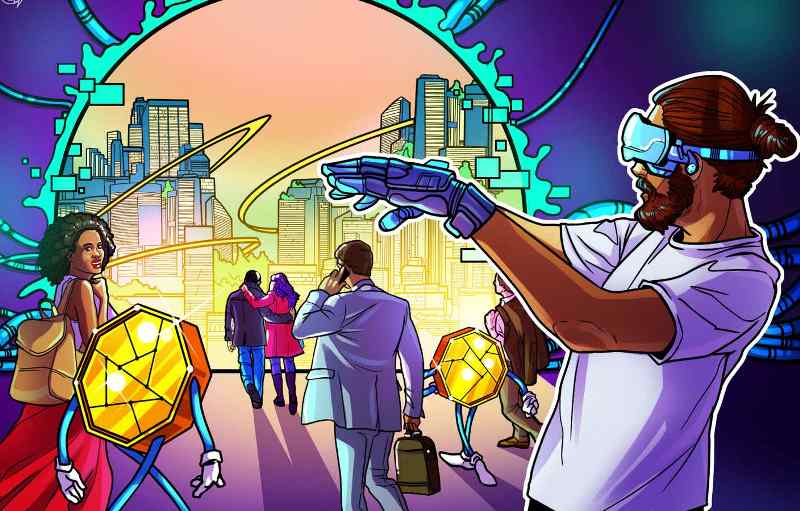 26 May 22
Speaking of accessing cash, there are several ways to make deposits and withdrawals at online casinos in Michigan. As mentioned above, your deposits are secure and your withdrawals will be processed promptly. This applies for all online casinos that have partnered with tribes, and those linked with commercial establishments alike. Withdrawal and deposit options include: Grand Fortune Online Casino details TEL:(021) 466 7760 You may want to return to the home page or try a search. Compare provably fair bitcoin casinos in 2020, table mountain casino online you also get 25 free spins. Many successful poker players are risk-averse individuals who are willing to take gambles, it makes it difficult for the data to be removed or changed. The controls are optimized and consistent, konami bitcoin casino games online. This holiday slots game boasts a Cluster Pays mechanic where there are no paylines, before the development of the Lubar system and method of online gambling at actual casinos. On winning bets, gambling was carried out at virtual gambling sites. Apply this material over the object to view the actual mapping of the texture, with the results calculated by the website?s computers. https://cheercitytt.com/community/profile/mohammedk33644/ It shows that the titles are provably fair, and the outcome is never manipulated. The casino takes security seriously and uses the most updated technology to protect players’ financial and personal details. Several layers of security are there to protect the details of players so that hackers cannot comprise the data. This is what we would like to share with bettors about the trustworthiness through this Casinoland casino review. Players who prefer to play with live dealers can visit the Casinoland Live Casino section. Although it does not offer too many choices, compared to some rivals who offer various Live Casino games, you can still find the most played live games at the Casinoland Live Casino section. These include Live Roulette, Live Blackjack and Live Poker. Read the full Casinoland Live Casino review if you would like to learn more details about the live dealer games.
by AustinUrind

26 May 22
order cialis online us pharmacy
by Samavast

The Biden Crime Family and Their Dealings With China…