There are no gainers in CoinDesk 20 today.

Investors resumed their defensive posture as Russia seemed once again on the way to invading neighboring Ukraine. Even as U.S. Secretary of State Antony Blinken requested a meeting with his Russian counterpart, a mortar attack in the Donbas region of the Ukraine damaged multiple buildings, according to different reports.

The appetite for high-risk assets, including cryptocurrencies, tumbled. At the time of publication, bitcoin, the largest cryptocurrency by market capitalization, was trading at about $40,600, down about 8% over the past 24 hours. Ether, the second-largest crypto by market cap, was off similarly. All other altcoins in the CoinDesk top 20 by market cap were in the red. 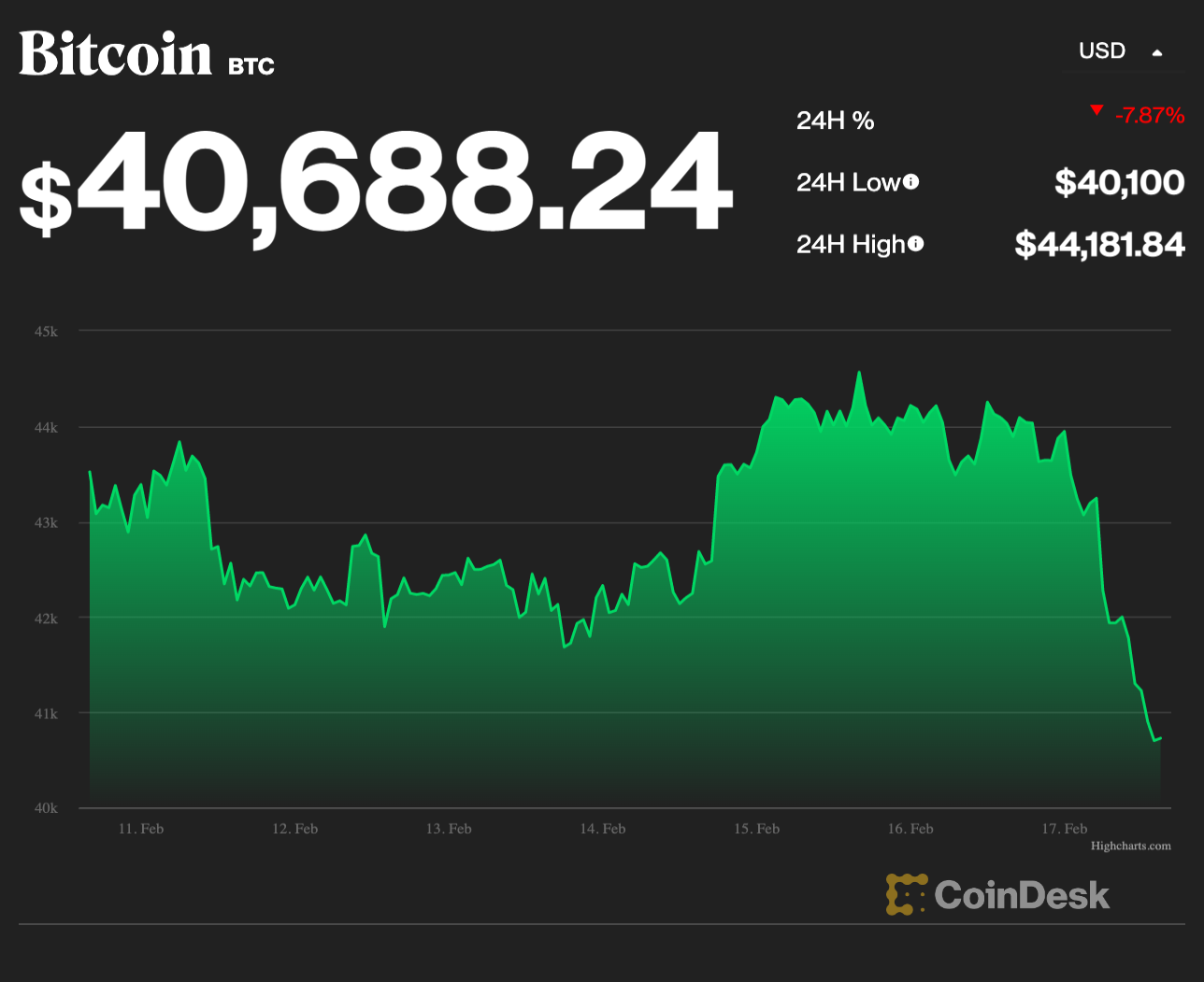 Reports of firing in a border region and accusations that Moscow is orchestrating a false flag operation, or an intent to pin the blame for starting conflict on Ukrainian forces, “has ratcheted up tensions and led to more investors seeking less risky positions,” wrote Susannah Streeter, senior Investment and markets analyst for U.K.-based, asset management firm, Hargreaves Lansdown, in an email.

In a week that featured separate reports on January’s Producer Price Index (PPI), which rose to 9.8%, and the U.S. central bank’s ongoing inflationary concerns discussed at its most recent meeting, investors returned to gold, which rose over $1,900 at one point Tuesday, and other lower-risk assets. “The price of gold, seen as a safe haven in times of crisis, has risen by another 1.37% to $1,896 an ounce, an 8 month high,” Streeter wrote.

Meanwhile, nearly two weeks after a meeting between its president President Xi Jinping with Russian President Vladimir Putin, China continued to weigh its response to the rising Ukrainian border tensions as it tries to balance its economic ties with Russia and the West. China imports a significant amount of oil from Russia but is also concerned by potential U.S. trade restrictions that would likely result from aligning too closely to Russia.

In a meeting with French President Emmanuel Macron, Xi called for a diplomatic solution to the brewing crisis, according to a report from China state media on Wednesday. 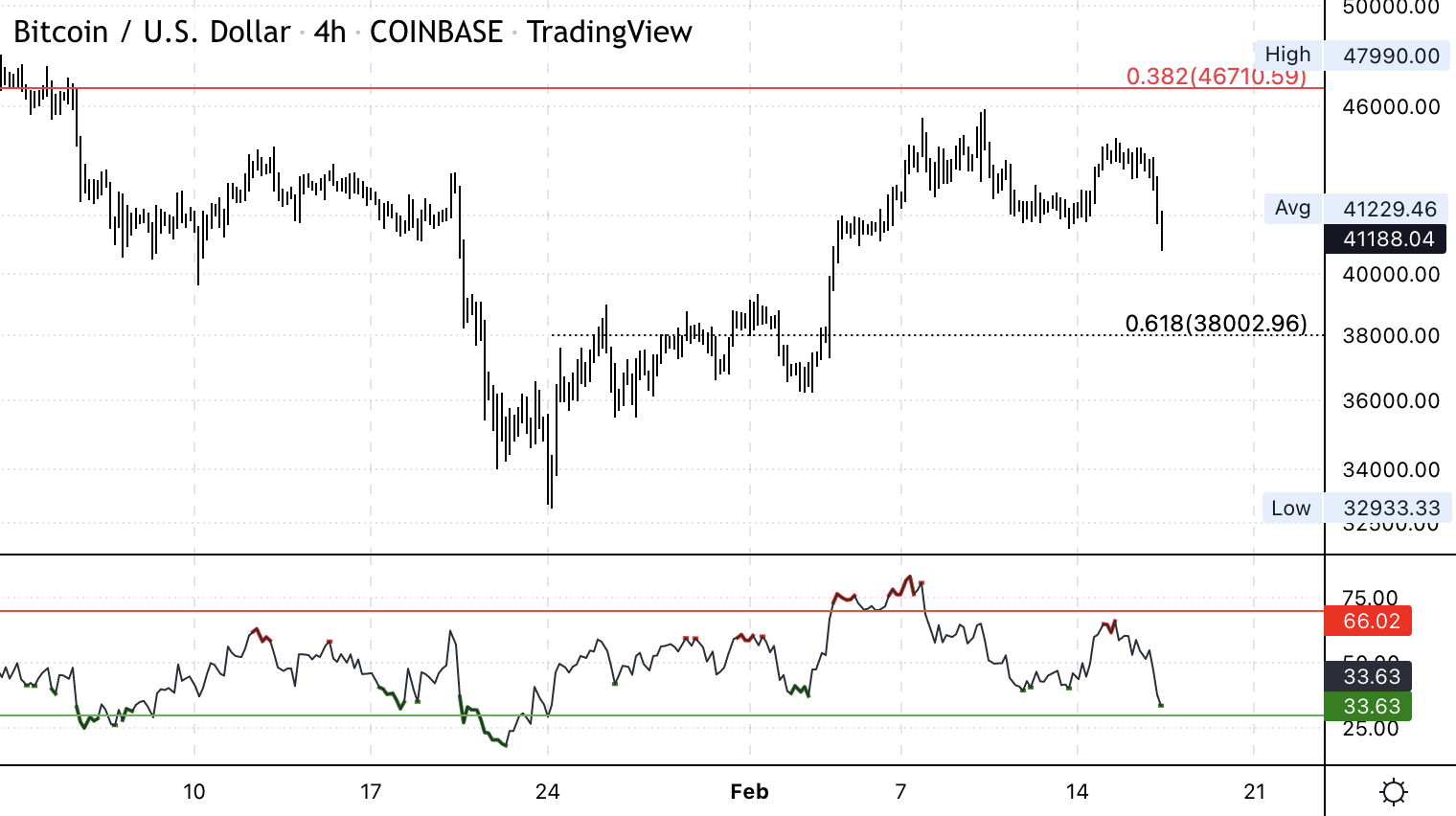 Bitcoin (BTC) pared earlier gains after sellers reacted to overbought conditions on the charts. Resistance between $44,000 and $46,000 capped upside moves over the past month, which contributed to price weakness.

The relative strength index (RSI) on the four-hour chart is oversold, similar to what occurred on Feb. 3, which preceded a 20% price jump. This time, however, the $46,000 resistance level could keep sellers active toward stronger support at $30,000.

Further, a series of higher price lows from Jan. 24 was broken on intraday charts, indicating a loss of upside momentum. 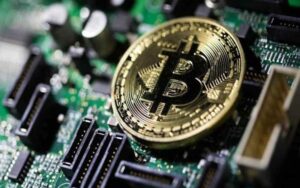