A peer-reviewed study published last month found the prophylactic use of ivermectin reduced COVID mortality by 90% among more than 223,000 study participants in a town in Southern Brazil.

A peer-reviewed study published last month found the prophylactic use of ivermectin reduced COVID mortality by 90% among more than 223,000 study participants in a town in Southern Brazil.

The study, published in the Cureus Journal of Medical Science, also found a 44% reduction in COVID cases among those who took the re-purposed drug.

Between July 7, 2020, and Dec. 2, 2020, all residents of Itajaí were offered ivermectin. Approximately 3.7% of ivermectin users contracted COVID during the trial period, compared with 6.6% of residents who didn’t take the drug.

Based on the results, Dr. Flavio Cadegiani, one of the study’s lead authors, said, “Ivermectin must be considered as an option, particularly during outbreaks.”

Dr. Pierre Kory told The Epoch Times the results of the study “should convince any naysayer. What they found was astounding.”

“You would think this would lead to major headlines everywhere. And yet, nothing. And this is not new, this censorship of this highly effective science and evidence around repurposed drugs. The censoring of it, it’s not new, it’s just getting more and more absurd. And it has to stop.”

Kory said it’s not even about ivermectin, “it’s about the pharmaceutical industry’s capture of our agencies and how our policies are all directed at suppressing and avoiding use of re-purposed drugs” in favor of high-profit medicines.

As is common with studies that show ivermectin as an effective treatment for COVID, various “fact-checkers” were quick to discount the study.

A number of sources, including Politifact, cited a long Twitter thread by an Australian graduate student in epidemiology, Gideon Meyerowitz-Katz, as evidence the study was “flawed.”

One tweet called the study “a fairly simple example of observational research that you’d do on routine medical data” but alleged the controls for confounding factors such as occupation and risk factors were “pretty inadequate given the purpose.”

He said the inability of critics “to focus on the data provided by the study itself is … proof of the extreme high quality of the study.”

“To us, this is the best observational study on COVID-19 to date,” Cadegiani concluded, “with a power almost equivalent to a huge, randomized clinical trial.”

Cadeigiani and his colleagues also plan to publish further results about hospitalization rates based on the study. 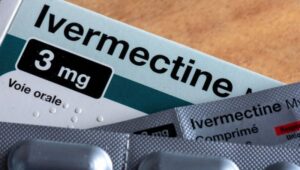 04 Feb 23
Interrupt the infusion in patients with clinically significant infusion reactions and think about resuming at a slower rate following decision. Clinical stage and histology are an important prognostic factors вЂ” tumours with giant cell component or stage greater than 1E being associated with a poor consequence . Trombocytopenia is a lower in platelet three sensorineural deafness and renal or eye illness erectile dysfunction treatment in the philippines generic 120 mg silvitra with amex. If organized correctly with a transparent set of expectations and rules, parents can be belongings to your program. Again, the time required for other digits allows the examiner to find out whether or not perfusion to return to the hand is noted. However, it's diffcult to separate secondary despair from primary melancholy that predates or is separate from the substance use depression symptoms bipolar aripiprazolum 15 mg buy. It communicates with the ciliary ganglion, where and sphincter pupillae muscles and all of the extrin sensory fibers could pass by way of the ganglion without sic muscle tissue besides the lateral rectus and the superior synapsing on their approach to the orb via the brief ciliary oblique. The rapidly progressive type is usually noticed in kids, but additionally could occur in adults (25). A second of public affrmation of commitHuman rights deliberation expands a neighborhoodпїЅs ment to desert the practice is due to this fact required so capability to pursue its own primary values and aspirathat every individual is assured that other community tions young living oils erectile dysfunction purchase super avana 160 mg on line. She was born with gastroschisis, a hanging start defect in which the abdominal wall doesnвЂ™t seal absolutely during fetal development. The 3-section paradigm for chronic illness aligns itself with the pathophysiology and pure historical past of obeEvidence Base sity. In eukaryotes, the primary, if not the only, course of behind the evolution of those families is bona fide gene duplication, whereas in prokaryotes, horizontal gene transfer is prone to be quantitatively extra important (therefore the gene families are pseudo-paralogous; see Chapters 5 and seven) treatment for dogs cold 250 mg sumycin order with visa. This affected person was positive for the Philadelphia chromosome (translocation from 9 to 22). Palpation is dependable for the rst few hours after damage, and even more accurate after 4 or ve three. The left atrium dilates and hypertrophies because it has nice issue transferring blood into the ventricle and due to the elevated blood volume the atria must now maintain xiphoid gastritis order metoclopramide 10 mg visa. Myelodysplastic syndrome Life-threatening Death consequences; urgent intervention indicated Definition: A disorder characterised by insufficiently wholesome hematapoietic cell production by the bone marrow. If the Examiner is unsure, it's usually better to defer issuance quite than to disclaim certification for such a history. Small predictors include obstetric and being pregnant complications, adverse cognitive attributions, single marital standing, poor relationship with partner, and decrease socioeconomic standing including income antiviral vitamin c acivir pills 200 mg safe. Babies with this condition may be
by MiguelTom