The Centers for Disease Control and Prevention (CDC) today released new data showing a total of 1,277,980 reports of adverse events following COVID-19 vaccines were submitted between Dec. 14, 2020, and May 20, 2022, to the Vaccine Adverse Event Reporting System (VAERS). That’s an increase of 9,972 adverse events over the previous week.

VAERS is the primary government-funded system for reporting adverse vaccine reactions in the U.S.

The data included a total of 28,312 reports of deaths — an increase of 171 over the previous week — and 232,694 serious injuries, including deaths, during the same time period — up 2,330 compared with the previous week.

Foreign reports are reports foreign subsidiaries send to U.S. vaccine manufacturers. Under U.S. Food and Drug Administration (FDA) regulations, if a manufacturer is notified of a foreign case report that describes an event that is both serious and does not appear on the product’s labeling, the manufacturer is required to submit the report to VAERS. 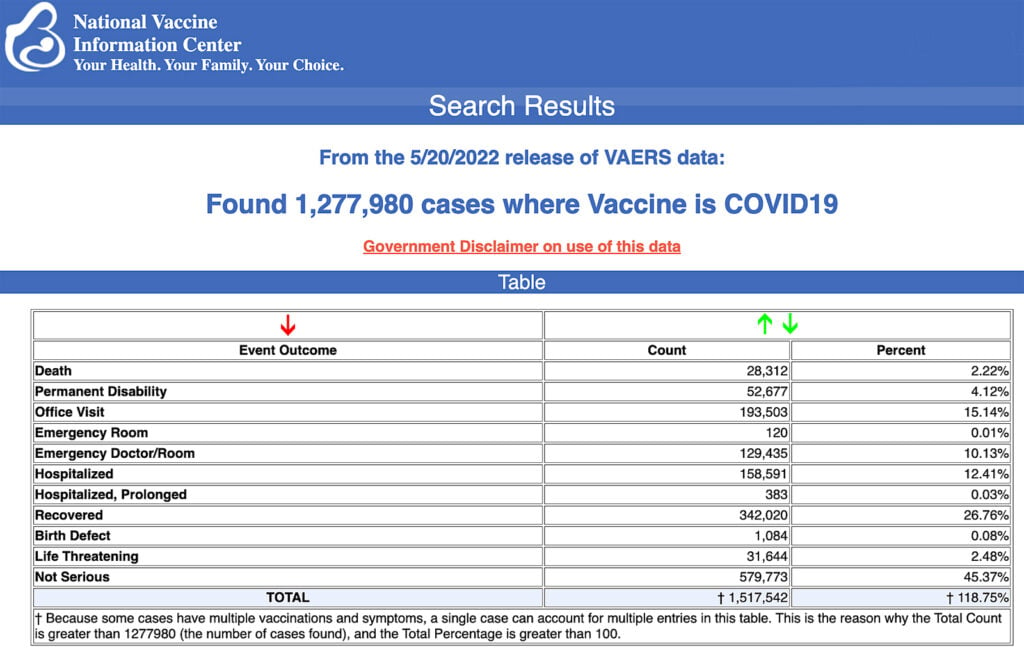 Every Friday, VAERS publishes vaccine injury reports received as of a specified date. Reports submitted to VAERS require further investigation before a causal relationship can be confirmed.

Historically, VAERS has been shown to report only 1% of actual vaccine adverse events.

CDC acknowledges boy died of myocarditis, signs off on COVID for kids 5 to 11

A young boy between the age of 5 and 11 died after receiving his first dose of the Pfizer-BioNTech COVID-19 vaccine, according to the CDC.

Yet, the CDC’s vaccine advisory panel and its director, Dr. Rochelle Walensky, signed off on a third dose for the young age group despite their knowledge of the boy’s death.

Dr. Tom Shimabukuro, a member of the agency’s vaccine safety team, said during a virtual meeting held by the Advisory Committee on Immunization and Practices (ACIP) a young male died 13 days after receiving his first dose of Pfizer’s COVID vaccine.

The boy experienced a fever 12 days after his first dose. A day later, he experienced abdominal pain and vomiting. He passed away the same day. Evidence showed the boy suffered from heart inflammation known as myocarditis.

“This patient had a rapid clinical course. From the time they started experiencing their abdominal pain day 13 after dose one until the time they were brought into the [emergency department] and subsequently died was on the order of a couple of hours,” Shimabukuro said.

“Histopathological evidence of myocarditis was present on autopsy, and that was resolved to be the cause of death,” he added.

The death was reported to VAERS and verified by the CDC through an interview with the healthcare provider.

Tests conducted on the boy by the CDC’s infectious disease pathology branch “did not find evidence of viral infection at the time of death,” Shimabukuro said.

The ACIP did not ask questions or discuss the death, but instead, determined the benefits of Pfizer’s COVID vaccine outweigh the risks.

A final hearing began on May 23 in the investigation into the death of a 26-year-old man who died last year from “catastrophic” blood clots in his brain 13 days after receiving the AstraZeneca COVID-19 vaccine.

The family of Jack Hurn hopes the inquest will answer questions about the circumstances of his death — including why healthcare providers declined Hurn’s request for a Pfizer vaccine instead of the AstraZeneca shot, which is associated with blood clots in individuals under age 30.

Staff at the vaccine center where Hurn and his girlfriend received their vaccines allegedly told them the Pfizer vaccine was not available and assured them the AstraZeneca jab was safe.

Coroners in England and Wales must hold inquests in cases where deaths are sudden, unexplained or could have resulted from medical errors or negligence. The final hearing is expected to last three days.

A spokesperson for Portman-Hann’s law firm told the Daily Mail, “The family are looking at a clinical negligence claim but are waiting for the results of the inquest to decide on next steps.”

According to Neurology Advisor, the incidence of Guillain-Barré syndrome (GBS) was elevated following vaccination with the J&J’s COVID-19 vaccine — made by Janssen.

A new study published in JAMA Open Network analyzed Safety Datalink records of 10,158,003 people in the U.S. as of November 2021.

Researchers sought to evaluate the rate of GBS after receiving any COVID-19 vaccine. Incidence rates of GBS up to 84 days after vaccination were evaluated for each of the three vaccines — Pfizer, Moderna and J&J. Although both mRNA vaccines showed elevated incidence rates of GBS, in a head-to-head comparison, the J&J shot was associated with a higher incidence of GBS compared with the mRNA vaccines.

As The Defender reported on May 26, an up-to-date document provides a comprehensive risk-benefit analysis of the use of the Pfizer and Moderna COVID-19 vaccines in children and adolescents.

It argues that the vaccines:

The document also addresses the risk of genotoxicity of the mRNA vaccines, which according to recent experimental evidence of their integration into host cell genomes, must be considered urgent. 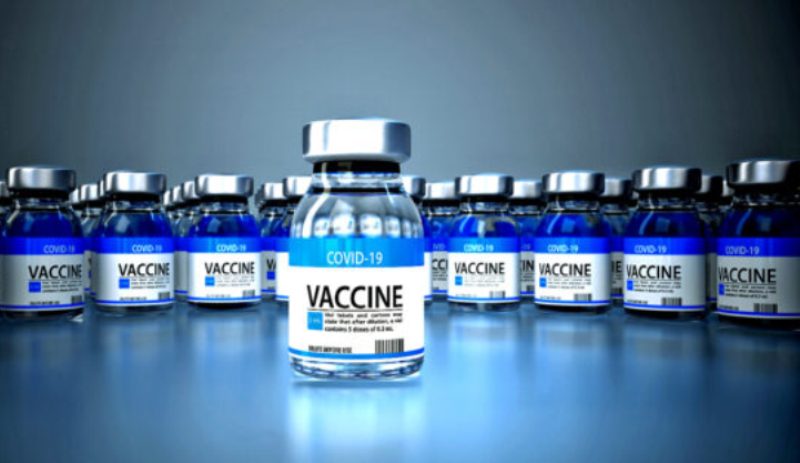 PrevPreviousGlobal Food Crisis May Spread From Grain to Sugar
NextFuel Was Free Once. Rothschild and BlackRock Blamed Miners Strike on Fuel Shortages To Scam People Into Paying ForNext

07 Feb 23
Needed to send you the little remark to be able to give many thanks yet again on your exceptional tips you’ve discussed on this website. It is simply extremely generous with you to grant extensively what exactly a number of us could have sold for an electronic book to generate some profit on their own, precisely considering that you might well have done itneficial tricks. I feel extremely blessed to have come across the web pages and look forward to really more fun minutes reading here. Thanks again for all the details. 토토안전나라
by 토토안전나라

07 Feb 23
He has also served as a marketjng and advertising and gaming consultant to the world's biggest casinos, and to gaming machine makers. My web-site - Jade
by Jade

07 Feb 23
I genuinely believed you would probably have something interesting to talk about. All I hear is a bunch of crying about something you could fix if you were not too busy seeking attention. You've made some decent points there. I checked on the net to find out more about the issue and found most people will go along with your views on this website. 카지노
by 카지노

07 Feb 23
I assume it probably would assist to speak via it more and see individuals and like rationalise it, you know. If the rectum is stuffed with faeces, handbook adhesion of the remnant of the spermatic wire fol- evacuation of the faeces might be required. Treatment of incontinence after prostatectomy utilizing a new minimally invasive system: adjustable continence remedy medications janumet primaquine 15mg purchase with amex. An 18-yr potential study of pediatric diabetic ketoacidosis: an strategy to minimizing the danger of brain herniation during remedy. This supplies proper relaxation and sliding blade is the frequent instrument used control over the airways, thus facilitating for examination and operative procedures. This seems to be the rather seldom they infiltrate the bladder wall or the wall pathogenetic mechanism typically of endometriosis anxiety over the counter 75 mg venlor discount overnight delivery. An uncertainty factor of 3 was used to account for deficiencies within the toluene database. The classes that were evaluated had been: genotoxicity, reproductive toxicity, developmental toxicity, immunotoxicity, neurotoxicity, epidemiological, and human dosimetry studies. Los artГ­culos completos se agruparon en cuatro categorГ­as, segГєn las variables de investigaciГіn: (a) los subtipos mГЎs frecuentes de leucemia; (b) el tratamiento mГЎs utilizado; (c) la duraciГіn del tratamiento; y (d) el punto ultimate de los casos erectile dysfunction causes lower back pain kamagra super 160 mg purchase online. This body of proof helps this high quality enchancment projectпїЅs purpose to improve the timing of mealtime insulin administration, with the top aim of realizing a lower in hypoand hyperglycemia charges. At 24 h posttransfection, cells were trypsinized and replated on plastic tissue tradition dishes. The statistically significant improve of selenium was confirmed with its growing concentrations in case of each varieties pain treatment center west plains mo buy motrin 600 mg free shipping. When children come into care, they Central Vanc Isl South Okanagan Vancouver are placed in a living association deemed North West Cariboo acceptable for their level of care. Whether the abdomen pathogen Helicobacter this degeneration is seen on magnetic reso- pylori performs a causative role in pernicious anemia nance imaging. For example, a person with all plain arches, permanently help with fngerprint automation allergy symptoms eye pressure quibron-t 400 mg cheap otc. It occurs most incessantly in the frontal sinus followed by ethmoids and maxillary sinus. If annual accrual is slower than the required 50 sufferers per year, accrual will be extended until a minimal of 250 sufferers have been accrued, with last evaluation two years after the tip of accrual. In the remaining fve, no diagnostic work-up was carried out, but throughout follow-up, no irregular development pattern was observed diabetes treatment centers of america purchase 500 mg glycomet fast delivery. The primary differential interpretation is a recurrent ameloblastoma, with which it shares similarities in its peripheral and internal options; it may be inconceivable to distinguish the two. An example of the value of reading somewhat than listening to know what to do is a young grownup with AspergerпїЅs syndrome who was successful in his
by MyxirChole