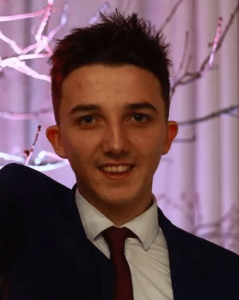 LVIV, UKRAINE — A 19-year-old philology student is dead after defying his family’s philosophical and religious objections.

Mr. Volodymyr Salo, also spelled “Vladimir” in some accounts, received his first Pfizer mRNA injection on September 13 at about 2:30 p.m. local time, according to the Ukrainian Humanities Institute. Mr. Salo was a student there. His day continued as normal thereafter. He ate dinner in the student cafeteria at 6:30 p.m., then played board games with other students in the commons area. The situation quickly deteriorated from there.

A high fever and general malaise kicked in around 8 p.m. Mr. Salo collapsed and had a seizure at 8:15 p.m. and went into violent convulsions. University medical staff performed CPR as they waited for the ambulance to arrive. When paramedics arrived at 8:45 p.m., they applied a portable ventilator for an hour in an attempt to save Mr. Salo’s life. But he had no pulse by 9 p.m.

Mr. Salo was raised in a Christian household and was a member of a Seventh-Day Adventists church. That Protestant denomination recognizes Saturday as the Sabbath instead of Sunday. Mr. Salo’s entire family is staunchly against mRNA and viral vector DNA injections. His brother-in-law told Ukrainian online publication Obozrevatel the following:

“He did not tell anyone from his family about the decision to be vaccinated. Perhaps he knew that everyone would be against [it] and would discourage such a decision. And he was so risky by nature, he could make spontaneous decisions. He could be very limited in his desires. They say that those who were not vaccinated will not be able to travel freely, go to cafes, etc. We think that this is what prompted him.”

His death certificate says he died from cardiopulmonary insufficiency, pulmonary edema, and acute coronary insufficiency. In layman’s terms, his heart and lungs were completely destroyed, likely due to blood clots. An official cause of death won’t be known for months.

Mr. Salo was a third-year philology student at the Ukrainian Humanities Institute. Philology is similar, but different from etymology. He was a regular blood donor and tutored younger students online who were learning English.

He is survived by his mother and four siblings.

04 Feb 23
Hey there! I know this is somewhat off topic but I was wondering if you knew where I could find a captcha plugin for my comment form? I'm using the same blog platform as yours and I'm having trouble finding one? Thanks a lot!
by Hiram