By The Yeshiva World

Israel’s Chevrei Kadisha are staggering under the load of the high COVID death rate this month amid an unprecedented infection rate spurred by the Omicron variant, with the number of COVID cases confirmed in three weeks in January surpassing all the cases confirmed in 2021.

Since the start of January, 468 COVID fatalities have been buried through the Religious Affairs Ministry, which connects hospitals to Chevros Kadisha throughout Israel, as compared to last month, when only 38 COVID fatalities were buried, Yisrael Hayom reported.

“It’s extremely difficult to deal with the situation right now,” Rav Avraham Mendla, the director of the Chevros Kadisha Forum and head of the Chevra Kadisha in Tel Aviv, told Yisrael Hayom.

“We’re almost completely out of manpower. We’re recruiting more volunteers. We barely survived the previous wave with similar numbers but now we still aren’t even close to the peak of fatalities. What will happen if there will another 50% of the fatalities that we have today? I daven that we won’t reach such a situation.”

Another member of the Chevra Kadisha Forum told Yisrael Hayom: “The number of fatalities is insane and now we’re also beginning to see children who were niftar [from COVID]. The pediatricians’ protests against the end of students’ quarantine stem from the fact that the pediatric emergency departments are beginning to fill up – and they’re also coming to us. It’s horrible.”

Moshe Shimon, the director of the Kehillas Yerushalayim Chevra Kadisha, which tends to over 50% of the kevuros in the capital every day, said: “Our workers are working with mesirus nefesh, day and night, around the clock. We’re used to about 7 levayos a day and now we have 14 levayos a day. It was absolutely terrible last Motzei Shabbos – another levaya every half hour. We’re approaching a catastrophe.”

On Motzei Shabbos, the Health Ministry confirmed another 58 COVID fatalities, raising the death toll to 8,657. 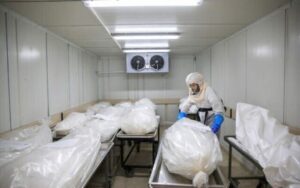 26 Jan 23
Oliff A, Defeo Jones D, Boyer M, et al stromectol canada buy 6 could not be reached either because their current address was unavailable, or they did not respond to the invitation or subsequent reminders
by Gaftkette