Public humiliation ritual, anyone?
Even the MSM is in on the exposure now.
RIP little Joseph. 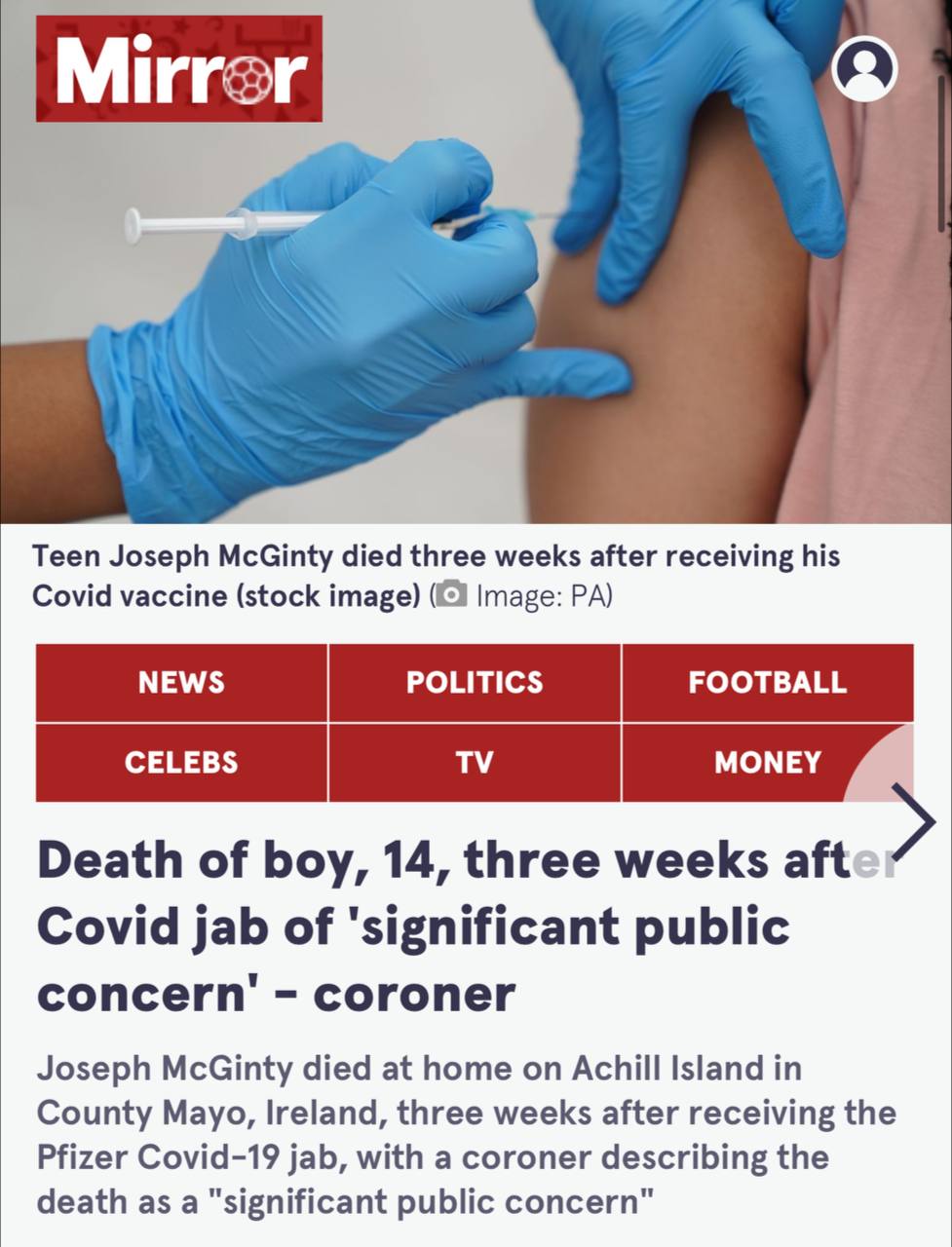 Joseph McGinty was vaccinated with the Pfizer Covid-19 jab on August 20, 2021.

He died at home on Achill Island, Mayo, just over three weeks later on September 13, the Irish Mirror reports.

A request for safety information from Covid-19 vaccine manufacturer Pfizer is to form part of the “considerable investigation” to be conducted into the death.

He was hospitalised on September 1 and stayed overnight at Mayo University Hospital before he was discharged the following day.

He attended the hospital again on September 8 for review.

“The circumstances of Joseph McGinty’s death is that Covid vaccination was administered to him,” Mr O’Connor said.

“That there appears to have been either a reaction or a significant change in his medical circumstances following the administration of the vaccine and that subsequently, unfortunately, Master McGinty died.”

Patricia McGinty formally identified her son’s remains on the day of his death but “has very little recollection of the morning in question,” barrister for the family Ms Rita Kilroy of Lavelle Bourke Solicitors told the court.

The pharmaceutical giant led the race to find a vaccine

As a result, the case could take “months or possibly years to conclude its findings,” Mr O’Connor said.

Ms Kilroy made an application on behalf of the family for legal aid.

“We would perceive there to be a concern for public health and safety and potential for recurrence in two circumstances,” Ms Kilroy told the court.

“He had received the Covid vaccine on August 20, 2021 and in those circumstances Coroner we would perceive that there would be a concern arising there that we would require the safety guidelines and so forth relating to that Pfizer vaccine to be available to the Coroner and for there to be an inquiry into the circumstances in that regard.”

Coroner Pat O’Connor clarified that legal aid in such circumstances is significantly different from legal aid as it is administered in the district or higher courts.

“The application is made to the Coroner who then must decide whether the criteria is complied with,” Mr O’Connor said.

“It is not the Coroner that grants legal aid, but the legal aid board.”

Ms Kilroy applied to adjourn all other matters of the inquest, including the reading into evidence of the cause of death, pending the outcome of the legal aid application.

The Coroner granted certification for the request for legal aid and adjourned the inquest for further mention at Swinford Courthouse, Co Mayo on December 20.

PrevPreviousCanadian Government Preparing to Euthanize Children Without Parental Consent
NextThe Sequel to The Fall of The Cabal By Janet Ossebaard and Cyntha Koeter – Who Is the Cabal!?Next

26 Nov 22
Have you ever considered writing an e-book or guest authoring on other websites? I have a blog based upon on the same subjects you discuss and would love to have you share some stories/information. I know my viewers would appreciate your work. If you're even remotely interested, feel free to send me an e-mail.
by Rashad

26 Nov 22
Good day very cool website!! Man .. Excellent .. Superb .. I will bookmark your website and take the feeds also? I'm glad to find numerous useful information here within the submit, we need work out extra strategies in this regard, thank you for sharing. . . . . .
by www.communicate-ed.org.uk

26 Nov 22
Step 4: The greater the true count, the more you should bet. This is where card counting becomes more art than science. Some blackjack books give rigid rules on how this should be done. However, the casino managers have read these books too, and the patterns recommended in earlier books now set off red flags. How you do this should depend on your own style, and how much heat you are getting. It helps avoid heat to keep the ratio of maximum bet to minimum bet to a limit, known as the ?Bet Spread.? Only increasing bets after a win, only decreasing after a loss, and staying the same after a push, makes play look more natural, but at a cost to profitability. CVData and CVCX blackjack simulators and calculators provide blackjack massive statistics. Up to 60,000 stats and 250 page reports can be generated. Optimal betting is calculated to improve results and lower risk. 50,000 pre-run sims are included. https://medformei.com.br/community/profile/erma8890922666/ Technology News From The Philippines When it comes to land-based gambling, the Filipino government has a more conservative approach, so you can expect a difference in legal online and land-based games. Sports betting, for example, isn’t legalized, but horse racing and even cockfighting have been approved by the government. For the fans of casino games, we’re happy to say that they can safely participate in any land-based games such as slots, blackjack, roulettes, and others. However, where is it best to play? Look no further than the list below, where we’ll reveal the biggest gambling brands in the Philippines! This site uses cookies. By continuing to browse the site, you are agreeing to our use of cookies. 22Bet and Casimba deserve to be highlighted as Philippines online casinos with great options in that sense. As it happens in every casino, it is necessary to at least register in order to enter one of the rooms in the live lobby. On the other hand, playing requires real money balance вЂ“ bonuses do not apply to live dealer games.
by weitnem

26 Nov 22
Hi, I do believe this is a great web site. I stumbledupon it ;) I am going to revisit yet again since I book marked it. Money and freedom is the best way to change, may you be rich and continue to help other people. My web page 오케이엑스
by 오케이엑스